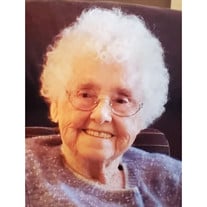 WILLIAMSTOWN- Alice J. Goudreau, from The Gardens in Williamstown, passed away after a brief illness on March 29, 2021, surrounded by loved ones at her daughter's home in Montpelier.  She was born on July 28, 1924 in Plessisville Quebec to Cyrille and Lydia (Fradette) Brochu. She was the youngest of 13 children.  She grew up in Plessisville and attended grade school through 6th grade. In 1944 she married Lionel Pellerin. They bought a farm on Rang 11, where they made their home and had 10 children. In the fall of 1960, they moved to Vermont, purchasing a farm on Baptist Street in Williamstown.  Less than a year later, Lionel passed away.  With limited ability to speak English, she was left in a new country with a farm and nine children between the ages of 4 and 16. Despite these challenges, she made the courageous decision to stay in Vermont. With her growing children, she continued to operate the farm until she sold it in December 1968.  She then moved her family to Pleasant Street in Barre where she would live for the next 50 years.  She got a job as a cook at Central Vermont Hospital, beginning a long career and becoming well known for her "Alice Soup".  Her limited English did not keep her from getting ahead; she retired in 1989 as the Cook Supervisor. In 1974, she married Maurice Goudreau. He had five sons that brought additional love, laughter, and family into her life. Maurice passed away in 1986. Alice faced many adversities in her life head on. She never felt sorry for herself, instead she forged ahead and built a good life for those she loved. She was fiercely devoted to her family and her large circle of friends, many of them fellow French-Canadians. Her home was always open to all; you were welcome anytime and it did not matter how many others you brought along. Among other things, she enjoyed traveling, eating out, cooking, and was well known for her delicious meat pies. She loved puzzles, knitting slippers for everyone, visiting with friends and family and playing cards (and winning). Alice also spent time writing a personal memoir, watching soaps, and loved a good bowl of poutine. Alice was a member of the Ladies of Ste. Anne and of La Societe St. Jean Baptiste for which she was a long time treasurer. She was also a devout Catholic and a member of St. Monica Church, her rosary was always kept on a side table next to her favorite chair. She will be greatly missed by her family and friends and all those who loved her. She leaves a legacy of 10 children, 5 stepchildren, 29 grandchildren, 21 great grandchildren and numerous nephews and nieces.  Her children are Pierrette and John Gilbert, Rodrigue and Ellen Pellerin, Michel and Marlene Pellerin, Ghislaine and Lloyd Baker, Richard Pellerin and Becky Miller, Jacinthe Pellerin, Solange and Dennis Fedele and Martine Patterson and Karjala Koponen.  Her stepchildren are Bob and Anne Goudreau, Judy Goudreau, Raymond Goudreau, Jacques and Doreen Goudreau and Marc and Caroline Goudreau.  She leaves behind a brother who will be 100 this coming June, his wife Lucille of Arthabaska, Quebec, and a dear sister-in-law, Armande Pellerin of Plessisville. Alice is predeceased by Lionel Pellerin, Maurice Goudreau and Herve Corriveau, a dear companion of more than 20 years, her sons, Georges and Rejean, stepson Andre Goudreau, grandchildren Debbie and Erick Gilbert, eleven siblings, Sylvio, Ananias, Rodolphe, Germaine, Leona, Georges, Anne-Marie, Juliette, Emeril, Bernadette and Aldea. A funeral service to honor her life will be held at St. Monica Catholic Church in Barre, VT on Saturday April 10, at 1 p.m. The funeral will be streamed live on:https://youtu.be/BuKmyJEHtyM . Calling hours will be on April 9th; from 2 p.m. to 4 p.m. and 6 p.m. to 8 p.m. Extra parking is available at St Monica's Church parking lot. Masks and social distancing is required.Due to COVID restrictions, there will be no reception following the funeral service. A spring burial is scheduled for June 5th at 11 a.m. in St. Sylvester's cemetery. Donations in her memory may be made to Ray Tooland, Wayward Wheels Inc., 1 Sunnyside Terrace, Montpelier VT 05602 or Central Vermont Home Health & Hospice, 600 Granger Rd, Barre VT 05641. Arrangements are in the care of the Pruneau-Polli funeral home 58 Summer Street in Barre.

WILLIAMSTOWN- Alice J. Goudreau, from The Gardens in Williamstown, passed away after a brief illness on March 29, 2021, surrounded by loved ones at her daughter's home in Montpelier.  She was born on July 28, 1924 in Plessisville Quebec to Cyrille... View Obituary & Service Information

The family of Alice J. Goudreau created this Life Tributes page to make it easy to share your memories.

WILLIAMSTOWN- Alice J. Goudreau, from The Gardens in Williamstown,...

Send flowers to the Goudreau family.