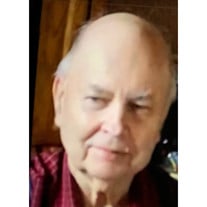 SOUTH BARRE- Allen F Blaine,84, of South Barre passed away peacefully at the McClure Miller Respite House in Colchester during the early morning hours of October 16, 2020. While realizing he was facing the biggest battle of his life, he continued to show his courageous and independent spirit until the very end. Allen was the oldest child born to Marshall and Christie (Howard) Blaine in Lebanon, New Hampshire, on May 30, 1936. While still a toddler, he and his parents moved to Orange, Vermont. There he helped his parents on the family farm growing vegetables for both wholesale and retail markets   He attended St. Monica elementary school and graduated from Spaulding High School in 1954. The next period of his life included working on a farm in Coventry, Connecticut, and at a ski resort in Stowe, Vermont. Then he chose to enlist in the Air Force, where he served at bases ranging from Texas to as far away as Thule, Greenland.  While in the service, he also took advantage of the opportunity to advance his education earning numerous college credits at night school. Upon leaving the Air Force with an honorable discharge, he proceeded to complete requirements for a bachelor's degree from the University of Vermont   He worked as a civilian employee with the Vermont Air Guard, then moved on to work with the state of Vermont as a job counselor until he retired. More than his educational and career accomplishments, what really defined Allen's life, was his love and compassion for others. His middle name was Francis, named after the humble friar, Saint Francis of Assisi.  Like the saint whose name was conferred on him at Baptism, Allen spent his entire life alert and responsive to the needs and desires of others. He never married, but he gave more of himself than most of us. He cared for his parents when they were no longer able to care for themselves, and then, when the need arose, he went on to care in much the same way for others. He also loved children and took great pleasure in bringing them joy and contributing to their sense of accomplishment and self-worth. He remembered them not only at Christmas, but on birthdays and other special occasions. It didn't matter if they were nieces or nephews, cousins, or simply the children of friends. He loved them all. I am his brother, ten years younger, so I remember how special he was to me from an early age.  He was more than a brother.  He was like a second father to me in many ways.  When my own children were growing up, I remember so fondly how much Allen enjoyed staying up late with my wife and I putting together the toys and wrapping and decorating so that Christmas morning would be perfect for these little ones, just as he had done for me and my sister. Allen also was an avid 3-D photographer. His grandmother, Ida Howard, gave him a View Master camera back in the 1950's   The hobby grew from there.   Besides recording on film the many family events throughout the years, he even went on to share his interest through a 3-D club where he made lasting friendships with people from as far away as Australia. Allen will be greatly missed, not only by his brother and sister, but by his nephews and their wives and children, and by the many people who have been blessed to get to know him and love him as the beautiful person he was . Allen is survived by his brother, Brian Blaine of Naples, Florida and his wife, Ginny (McGloin) Blaine, by his sister, Sylvia Wynn of San Francisco, by his nephew Gary and his wife, Lesley, and their children, Andrew and Madison, and by nephew John and his wife, Laura, along with their children, Morgan, Mitch, and Macy.  He also leaves many, much loved relatives, and numerous friends.  He was predeceased by his parents and grandparents, and by his sister's husband, Jesse. There will be no calling hours. A memorial Mass will be celebrated at St. Monica Catholic Church in Barre at 10 AM on October 31st. Per state mandate, masks and social distancing is required. Memorial gifts in Allan's memory may be made to the American Cancer Society. Arrangements are in the care of the Pruneau-Polli Funeral Home, 58 Summer Street in Barre.

SOUTH BARRE- Allen F Blaine,84, of South Barre passed away peacefully at the McClure Miller Respite House in Colchester during the early morning hours of October 16, 2020. While realizing he was facing the biggest battle of his life, he continued... View Obituary & Service Information

The family of Allen F. Blaine created this Life Tributes page to make it easy to share your memories.

Send flowers to the Blaine family.