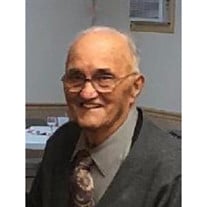 Andre Ducharme Websterville - Andre Ducharme, 90, passed away from this life on Tuesday June 22, 2021 at his home surrounded by his family. Andre Ducharme was born in Sherbrooke PQ on June 16, 1931 to Jean-Baptiste Ducharme and Almerilda Breault.  He left school in 7th grade to work on the farm with his family. On May 29, 1954 he married Irene Lessard of Coaticook, PQ.  They moved to Websterville, Vermont in 1962 when he started working as a Foreman at Rock of Ages in Graniteville, Vermont retiring after 31 years of service.   After retirement he worked for St. Sylvester's Cemetery for 18 years. He was a Lifetime Member of The Canadian Club and the Elks Club, both in Barre, Vermont. Andre is survived by his wife Irene, his children Nicole (Dave) Nichols, Lise (Mark) Shallberg, Guy (Lorraine) Ducharme, Suzanne (Mark) Hutchins, Pierre (Carmen) Ducharme and Robert (Bonnie) Ducharme.  He also leaves his grandchildren Kelley (Ryan) Reed, Jennifer (Jeremiah) Trombly, Alain Champigny, Mylene Champigny, Andre Ducharme, Deanna Ducharme, Nicholas (Stacey) Ducharme, Chad Hutchins and fiancée Caitlin Dorka, Ty Ducharme, and Jayme Ducharme and companion Brad Gaboriault, Geoff Breault and Heidi Breault.  He also leaves four great-grandchildren Dylan Lawrence, Zachary Reed, Lauren Trombly, Sawyer Trombly, and Bennett Ducharme. He is survived by his two sisters Pauline DeLabruere and Therese Pederson and husband Pete.  He also leaves behind several nieces and nephews. He was predeceased by his parents, grandson Eric Hutchins and great-granddaughter Olivia Reed. A Mass of Christian Burial to honor and celebrate the life of Andre will be held on Saturday, July 3, 2021 at 11:00 AM at St. Monica Church, 79 Summer Street in Barre  Vermont.  Family and friends may call at the Pruneau-polli Funeral Home from 9:00 AM until 10:45 AM prior to the Funeral Mass. There is extra parking across the street in the St. Monica parking lot. The Funeral Mass will be live streamed on the following link: https://www.youtube.com/watch?v=yeU-O0WnvEM Burial will follow at St. Sylvester's Cemetery, 22 Websterville Rd, in Lower Websterville, VT  05678. In lieu of flowers, memorial contributions may be made to the Eric Hutchins Memorial Scholarship Fund and mailed to Chad Hutchins, 10 Cleveland Ave, Barre, VT  05641. Arrangements are in the care of the Pruneau-Polli Funeral Home, 58 Summer St, Barre, VT.

Andre Ducharme Websterville - Andre Ducharme, 90, passed away from this life on Tuesday June 22, 2021 at his home surrounded by his family. Andre Ducharme was born in Sherbrooke PQ on June 16, 1931 to Jean-Baptiste Ducharme and Almerilda Breault.... View Obituary & Service Information

The family of Andre Ducharme created this Life Tributes page to make it easy to share your memories.

Send flowers to the Ducharme family.