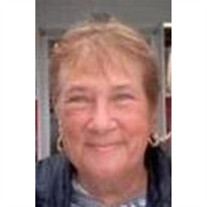 BARRE TOWN- Angela "Angi" Mary Mietkiewicz, 68, of Barre Town, Vermont passed away Monday, January 18, 2021, at her home surrounded by family. Mrs. Mietkiewicz was born in 1952 in Worcester, Mass. and was the daughter of the late Roderick and Frances Morgan. She graduated from Ascension Central Catholic High School in 1970 and worked many years at Friendly Ice Cream then retired from UMASS Medical Center. She developed friendships at school and work that she maintained until her passing. She was an amazing grandmother who enjoyed attending her grandchildren's special events, teaching them how to play cribbage and deeply cherished our family vacations to Ocean Park Maine. Angela is survived by her husband, Steven Mietkiewicz of Fort Myers, Florida; daughters, Colleen Kresco (Christopher) of Barre Town, Vermont with whom she lived, and Crista Gagnon (James Schlessinger, Jr.) of Ft. Myers, Florida; son, Brian Gagnon (Danielle) of West Boylston, Massachusetts; grandchildren, Brian A. Gagnon of West Boylston, Massachusetts, Owen M. and Aidan C. Kresco of Barre Town, Vermont, Remi M. and Colin R.A. Gagnon of West Boylston, Massachusetts; brothers, Roderick and Paul Morgan (Kathleen) of Cape Coral, Florida, as well as life long friends, too numerous to mention them all. The family would like to extend a heartfelt thank you to her team of caregivers at Dartmouth Hitchcock, Dr. Keisuke Shirai became part of our family.  The care she received the last few days of her life through Central Vermont Home Health Hospice was exceptional. In lieu of flowers, memorial contributions may be made in Angela's memory to St. Jude's Children's Hospital. All services will be private. Pruneau-Polli Funeral Home, 58 Summer Street in Barre, assisted the family.

BARRE TOWN- Angela "Angi" Mary Mietkiewicz, 68, of Barre Town, Vermont passed away Monday, January 18, 2021, at her home surrounded by family. Mrs. Mietkiewicz was born in 1952 in Worcester, Mass. and was the daughter of the late Roderick and... View Obituary & Service Information

The family of Angela M. Mietkiewicz created this Life Tributes page to make it easy to share your memories.

Send flowers to the Mietkiewicz family.