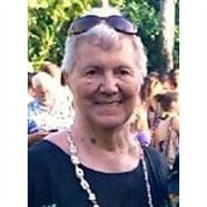 BARRE CITY - ANGELE M. MOREAU, 81, of Barre City passed away in the comfort of her home on Monday, February 1, 2021 surrounded by close loved ones. She was born on April 21, 1939 in Websterville, Vt. to parents George & Marie (Scalabrini) Raboin. She leaves behind her husband of 52 years, Roger Moreau; one son, George Gagne and wife, Lisa Gagne of Hawaii; two granddaughters, Brooke Gagne of North Carolina & Ashley Gagne of Barre Town, VT; and great-grandchildren Elijah Gagne-Koudaka, Isabela Gagne-Manix, and her "Little Man," Nova Eberly. Angie is also survived by siblings Georgette Belisle of Barre City, VT; Pauline & John Cazzetta of Bristol, CT; Jeanine & Paul Dunham of Graniteville, VT; Carmen & Norman Chaloux of Washington, VT; Mariette Beede of Chelsea, VT; and Michael & Bonnie Raboin of Orange, VT. She was predeceased by her parents George & Marie Raboin; 4 brothers Paul Raboin, Ronald Raboin, George Raboin, & Andre Raboin, and grandson Andrew Gagne. Angie was always a welcoming face at many of the food service and hospitality establishments around central Vermont where she worked prior to her retirement. Her interests included NASCAR racing, crocheting, crosswords, puzzles and bowling on the many leagues she participated in. She had an exponential influence on the younger generations around her. There are not many people in the area that cannot recall a moment or memory with Angie or, as she was lovingly known by most, "Tante Sis." Her presence, love, and support will be missed by many. A memorial service will be held in the spring. Details to be published at a later date. In lieu of flowers, the family requested donations in memoriam be mailed to Lamoille Area Cancer Network 198 Farr Ave, Morrisville, Vt 05661 or Home Health & Hospice at 600 Granger Rd, Barre Vt 05641. Arrangements are in the care of Pruneau-Polli Funeral Home, 58 Summer Street in Barre

BARRE CITY - ANGELE M. MOREAU, 81, of Barre City passed away in the comfort of her home on Monday, February 1, 2021 surrounded by close loved ones. She was born on April 21, 1939 in Websterville, Vt. to parents George & Marie (Scalabrini) Raboin. She... View Obituary & Service Information

The family of Angele M. Moreau created this Life Tributes page to make it easy to share your memories.

Send flowers to the Moreau family.