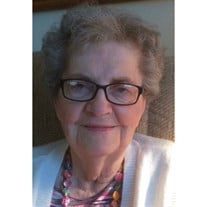 BARRE- Arline Pelkey died peacefully on December 28, 2020 at Woodridge Nursing Home at the special age of 95 ½ years. She was born on June 22, 1925 in Canaan, VT. She lived her formative years in Beecher Falls and attended St. Albert's school in Riverside, NH. Arline graduated from Canaan High School (1943) at the top of her class, played both basketball and softball, and was bilingual (French and English). After high school, she worked for the war effort at a defense plant in Medford, MA. As the war ended, she worked at the Ethan Allen Furniture plant in Beecher Falls for a period of time. She then decided to move to Barre, VT to take a job waitressing at Mario's restaurant. It was there that she met her husband, Roland W. (Pope) Pelkey, who thought she was the most beautiful girl he had ever seen. They married February 9th, 1952. Arline & Roland worked in the hospitality industry traveling to many states - FL, NY, NH, & VT before returning to Barre to start their family. Together they had 5 children: Patricia (1953) and Bruce (1954) Pelkey (both deceased after birth), Burt (Joanne) Pelkey, Kingston, NH, Anne (Chris) Coulter, West Lebanon, NH and Nancy (Jeffrey) Martell, Barre, VT. Arline was a busy homemaker for 10 years before she went to work at Sprague Electric where she was an inspector of capacitors until her retirement. Arline had a passion for family. Her relatives and family were extremely important to her and she always wanted to spend time with them. She loved having her friends over for coffee to talk about politics, movies, or religion. She loved to read magazines and newspaper articles. She was an avid Red Sox, Patriots, and Boston Bruins fan. She knew all of the player's names and loved to cheer them on. She and Roland were often seen on the dance floor at the American Legion. Many weekends were spent taking family picnics to various lakes in Vermont. She was an excellent cook, always a Sunday dinner with baked beans and hot dogs or roast beef with gravy. She was famous for her homemade apple pies. Arline was predeceased by her parents, Eva (Favreau) Cote and Isidore Cote, her brothers David Cote, Gerard Cote, and sister, Cecile (Cote) Fuller. She leaves behind her precious grandchildren: Jameson (Kelly) Pelkey, Groveland, MA, Sara Pelkey, Quincy, MA, Nicole Martell, Barre, VT, Nathan Coulter, West Lebanon, NH, and step-grandchildren Jeannie (Mike) Graves, Barre, VT, Michael Martell, Meriden, CT; great-grandchild Vivian Pelkey and step-great grandchildren Jaysen and Austin Graves and Carley Martell. Due to Covid restrictions, there are no calling hours. A Mass of Christian burial to honor and celebrate her life will be held in the spring at St. Monica's Catholic Church, date to be announced. Burial will follow the mass in St. Sylvester's Cemetery, Websterville, VT. The family of Arline would like to extend a sincere thank you to the entire staff at Woodridge who loved and cared for our mother and beloved Mimi, especially during these difficult months of isolation due to Covid. In lieu of flowers, donations can be made to Woodridge Nursing Home, Life Enrichment, P.O. Box 547, Barre, VT 05641. Arrangements are in the care of Pruneau-Polli Funeral Home, 58 Summer St., Barre.

BARRE- Arline Pelkey died peacefully on December 28, 2020 at Woodridge Nursing Home at the special age of 95 ½ years. She was born on June 22, 1925 in Canaan, VT. She lived her formative years in Beecher Falls and attended St. Albert's school... View Obituary & Service Information

The family of Arline T. Pelkey created this Life Tributes page to make it easy to share your memories.

Send flowers to the Pelkey family.