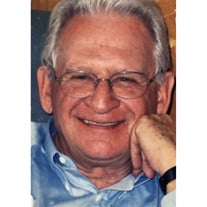 BARRE CITY- Arthur Anton Ristau, who held senior administrative positions during four decades of Vermont State Government, "checked out" on January 22, 2020.  Born on Bastille Day, July 14, 1933, he was 86 years old. Art started his career as a journalist and came to Vermont in 1960 as state manager for the Associated Press where he met his future wife, Anita Fregosi.  They were married in 1964. He graduated from Nichols College with a business degree and from Boston University with a degree in journalism. From 1954-56 he served in the US Army in Germany. He had a varied career as a writer and published more than a dozen articles in Vermont Life as well as many articles in New England golf magazines.  He was founding editor of the Vermont Environmental Report, the quarterly publication of the Vermont Natural Resource Council. In 1966 he was named administrative assistant to Phil Hoff, the first popularly elected Democratic governor in Vermont history. In 1970, he served as a consultant to the Darmouth Public Affairs Center. In 1973 he became the Director of the State Planning office under Governor Thomas Salmon and in 1975 Salmon appointed him Vermont's first Secretary of Transportation. Locally he was Barre's City Manager from 1977-1980 and served two terms on the City Council. He was a member of the Housing Authority for ten years and retired as its chair. Arthur was a founding member of Granite City Housing which developed and manages Lincoln House.  He served for ten years as the Lincoln House Chair. From 1980-1985 Arthur was the Director of Corporate Relations at Green Mountain Power.  From 1986-1992 he was State Liquor Commissioner.  His last public assignment, appointed by Governor Howard Dean, was on the Lottery Commission where he served as Vice Chairman for 12 years. A Democrat, he was active in the Presidential campaigns of Robert and Edward Kennedy and was a contributor to "The Torch is Passed," The Associated Press' book on the Assassination of President John F. Kennedy. He received several awards and scholarly recognitions including grants from the Ford Foundation, The National Science Foundation, The National Institute of the Humanities. (University of California) Arthur was born in Manchester, NH and was the son of Arthur and Ellen (Lawlor) Ristau.  He grew up on Cape Cod in the towns of Barnstable and Yarmouth.  Since 1990, he and his wife Anita, had maintained a second home in Brewster, MA.  He was a first generation American. In addition to his wife Anita, of 55 years he is survived by a son, Erich, his wife Patricia, and their family Shaun and Emily Corbett and Daniel and Nicole Corbett, a daughter, Gina, her husband Erich Ohngemach and their children, Marisa and Ethan of Leesburg, VA. As well as a sister, Paula Trespas of Yarmouth Port, MA and several nieces and nephews. A younger brother, Kurt died in 2012. Arthur enjoyed skiing and golf and was an aficionado of jazz music and a lover of the poetry of Yeats.  He was a voracious reader and most knowledgeable on history and politics. Art was a member of the Italian Mutuo Society for many years and co-authored the Mutuo's Centennial History.  According to his wishes, there will be no services. Friends are invited to join the family at the Mutuo Soccorso for a sputino on Beckley Hill in Barre on March 7th, 2020 at 1:00. Burial will be in Proctor, Vermont at a later date. Arrangements are in the care of the Pruneau- Polli Funeral Home, 58 Summer Street in Barre VT.

The family of Arthur A. Ristau created this Life Tributes page to make it easy to share your memories.

Send flowers to the Ristau family.