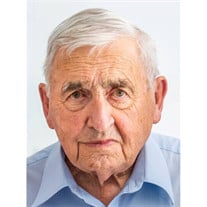 BARRE - Bernard P. Roy, 95, passed away peacefully on October 2, 2021 at his home, with his loving family by his side.  Bernie was born on September 17, 1926 in Washington, VT where he grew up and went to school.  At age 17, he signed up to serve his country during WWII. He served to the end of the war and returned home to graduate from Spaulding High School, graduating in 1946.  Soon after school, he married his beloved Lucille "Tookie" Benoit, started working at People's National Bank in Barre, which changed to First Vermont Bank and at his retirement was Key Bank of Barre.  He was in banking for 42 years.  In the early years of his marriage, he also worked part time in the Benoit family store in town.  Bernie and "Tookie" lived in Graniteville their entire married lives.  They had 9 children and after 45 loving years of marriage, Bernie lost his beloved wife to cancer. Bernie was a quiet, kind and gentle soul that would help anybody at any time.  When working at the bank, he was often sought out as the banker that one could speak to in their native, French-Canadian tongue.  He would say very little as he would contemplate and listen, and often puff on his pipe.  But helped whenever he could.  He was an avid hunter and member of the Benoit deer camp, proud member of Red Sox Nation, previous co-owner of the Roy Family camp on Woodbury Lake, bowler, and a frugal Mr. Fix-it. Through the years of raising his many children, he was the Trustee of St. Sylvester's Cemetery Association (for 54 years).  Bernie served on the Barre Town School Board and was one of board members that was instrumental in selecting the site for the Barre Town Elementary School. In 1997, Bernie met his second partner in life, Joan (McCallum) Hart and in that union, gained additional children and grandchildren.  He loved them all.  Many times after Sunday mass, you could stop at their house to find him sitting at the head of the breakfast table, with the Hart family all around him chatting.  He would be grinning at a story being told, clearly a happy man.  The Hart family was the icing on the cake for him, and he was happiest when surrounded by family. Bernie leaves behind his partner of 25 years, Joan Hart of Barre.  He had nine   children, Cindy Collins, Karen Roy, Stephen Roy all of Barre, James Roy (wife Becca) of Wolcott, Kathy Morse (Frank, deceased) of Barre, John Roy of Richmond, Ann Miller (husband Merle) of Barre, and Ronald Roy (wife Heather) of Claremont, NH, Alexander Hart (wife Rhonda), Rodney Hart (wife Kim) both of Williamstown, Rhonda Couillard (husband Chuck) and Karen Chouinard (husband Marcel) both of Barre. In addition, 23 grandchildren and nineteen great-grandchildren.   Bernie leaves behind many nieces and nephews.  Son Timothy Charles predeceased him in 1966. Bernie was the sixth of 14 children and leaves behind 3 siblings Anita Seguin (husband Charles) of S. Burlington, Donald Roy (wife Ann) of Riverview, FL, and Diane Elkins (husband Michael) of Clermont, FL.  He is predeceased by his parents, Oram and Lydia Roy, siblings Dolore Roy, Raymond Roy, Victor Roy, Marielore Foreman, Edward Roy, Rolland Roy, Armand Roy, Robert Roy, Normand Roy and Margaret Carney.  Bernie would proudly display his license plate representing "9 brothers served" their country. A Catholic funeral will be held on October 6, 2021, 10:00 at St. Monica Church in Barre, VT. In Lieu of flowers, donations can be made to Central VT Home Health and Hospice, 600 Granger Road, Barre VT. 05641.  Home Health and Hospice truly are angels and were there for him every step of the way.  Very special thanks to Michelle Blake as well as the Hospice Team whose kindness and compassion showed no bounds.

The family of Bernard P. Roy created this Life Tributes page to make it easy to share your memories.

Send flowers to the Roy family.