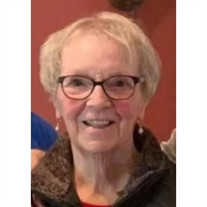 BARRE-Bette Anne "2P" (Plante) Morrill passed away peacefully in her sleep after a long illness at the Central Vermont Medical Center on December 8, 2021. She left behind her large and loving French Canadian family and countless friends that she was always close to. She was born in Barre, Vermont on May, 11, 1942 to the late Alfred Plante and Bernadette ( Frappier) Plante, formerly of St Alexis-des-Monts, Canada. She attended the St Monica School and Marian High School in Barre Vermont proudly graduating with its first class in 1960. On January 23, 1965, she married Donald F. Morrill. She became a proud army wife and moved to countless states.  Eventually they settled in Barre Vermont deciding to make it their home when her husband returned from his service in Vietnam.  She worked at the First Vermont Bank, Braun Dental and eventually retired from working after serving customers at the Vermont State Employees Credit Union. She was a member of the Canadian Club of Barre, Vermont and the Catholic Daughters of Barre, Vermont. Her Catholic faith was very important to her and enjoyed being very active in St. Monica's church even teaching religious education to her two children. She was also very helpful to countless friends who did not speak English, helping them to translate their mail from English to French and even driving them to appointments and church. She was everyone's rock and always there for everyone. "2P" is survived by her husband "Don", her son Don (DJ) , his fiancée , Ann Blanchard, her daughter AnneMarie "Annie" DeSimone and her husband Berardo "Todd" DeSimone. As well as grandchildren Zachary Morrill, Joshua Morrill, Berardo "Mathis" DeSimone, Colin Blanchard and his wife Jeri Blanchard, Jared Blanchard and Cannon Blanchard. She is also survived by her sisters Hilmaine Stanton and Suzanne Sweeny.  She is predeceased by her brothers Simon Plante and Eugene Plante. It is with regret that there will be no calling hours during these difficult times. The funeral will be at St. Monica's Church on December 14, 2021 at 11:00am and all are invited to attend. A private graveside burial will be at the Vermont Veterans Memorial Cemetery at 1pm. God willing, this spring the family will have a celebration of life for "2P" as anyone that knew her knows she was always up for a good party. She will be missed by all and is our "Angel in Heaven". Arrangements are in the care of the Pruneau-Polli Funeral Home, 58 Summer Street in Barre.

BARRE-Bette Anne "2P" (Plante) Morrill passed away peacefully in her sleep after a long illness at the Central Vermont Medical Center on December 8, 2021. She left behind her large and loving French Canadian family and countless friends that... View Obituary & Service Information

The family of Bette Ann Morrill created this Life Tributes page to make it easy to share your memories.

Send flowers to the Morrill family.