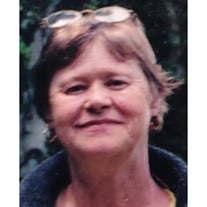 Betty Lou (aka Maggie) Dudek CHELSEA- Betty was born September 28, 1949, in Barre City hospital to her parents Mae Olive Marble Kezer and Lynn H. Kezer. Betty went to school at Washington Elementary then to Trowhill Elementary, and Spaulding High School. As a teen, she worked many jobs. As a young adult she discovered her passion for helping people in need and in 1971 she began her life-long career in the healthcare field while working at Waterbury State Hospital. In 1975 she moved to Massachusetts where she met and married Albert J. Dudek, who passed away in 1987. Betty worked at Belchertown State School as an Occupational Therapist Assistant. While working, she went to Springfield Technical College, and Quinsigamond College for Occupational Therapy. Betty moved back to Vermont in 1990 where she became a Community Living Coach at Washington County Mental Health. She retired after 30 years on December 31, 2020. She also worked at Westview Meadows, and Gary Home as a Residential Assistant, and retired in 2015. Betty became an Ordained Minister on October 20, 2013 and performed her first wedding for a coworker. Betty joined the Barre Elks and Chelsea Grange and continued to be a member until the end of her life. She is survived by her son, John P. Kezer (wife heather) of Graniteville, Vt, daughter Tina M. Strange (husband Matt) of Belchertown, Massachusetts, their children Nick Strange and Angelica Graziano and Sister Gloria J. Bell and her son Gary (wife Shelly) of Derry, New Hampshire. Also, Grandson Jacob Baron of Virginia, Matt Baron of Graniteville, Vermont, Granddaughter Angelic Graziano of Massachusetts. She was predeceased by her husband, parents, sisters, Linda M. Sherman, and Mary LaPerle, and brother Oliver A. Kezer. Betty has many grandchildren and great-grandchildren, and niece Brenda Beaudin (sons Justin and Benjamin) nephews Henry LaPerle and Clifton Sherman (Dale). Betty enjoyed working at WCMH and all her jobs and loved helping people reach their potential. Betty was grateful for her son John, daughter Tina, and sister Jean for their daily support, and all those who supported her throughout her life including her co-workers at WCMH, her loving neighbors, Marcel Rancourt, Nancy Button, Ernest Kennedy, and Frank and Terry. She and her family are grateful for VNH Hospice, especially Nurse Hayley Kinney, Gracia LNA, Social Worker Wendy Benedict, and Chaplain Lava Mueller. A Mass of Christian burial to honor and celebrate Betty's life will be held at the St. Monicas Church in Barre on Tuesday, December 28th at 11am. Friends and family may attend calling hours on Monday, December 27th from 5pm-7pm. There is extra parking across the street in St Monica;s parking lot. Arrangements are in the care of the Pruneau-Polli Funeral Home, 58 Summer Street in Barre.

The family of Betty L. Dudek created this Life Tributes page to make it easy to share your memories.

Send flowers to the Dudek family.