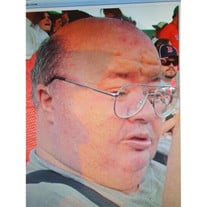 Barre City - Cameron Larry Campbell, 58, passed away on Thursday, June 25th, 2020 in his home at Highgate Apartments in Barre, Vermont.   He was the son of Clarence Leon Campbell, Sr., and Sylvia (Twine) Campbell Spencer. His greatest passions were the Boston Red Sox, and the New England Patriots.  He only got to attend one Red Sox game in person, and he loved it.  It was difficult for him with his disabilities, but he still made it up into the bleachers to watch the game.  No one ever had to watch the sporting news to find out what had happened with the Red Sox team, whether in season or not, because Cameron could (and would) tell you all about it as soon as he heard it. He dearly loved his family and was known to call people regularly just to check on them, whether near or far. He loved his Church of Jesus Christ of the Latter-Day Saints family and considered them friends as well as family, especially Todd, and truly valued all that you did for him.  It was very difficult for him when the COVID-19 pandemic prevented him from attending church each Sunday, but he wouldn't miss a service and went to church "on-line" regularly during this time. Cameron was very involved in Highgate Apartments Complex committees such as the Residents Committee and worked on celebrations and field days they held for the residents and children.   He was an advocate for anyone who needed one and the manager of the complex kindly said he kept them "on their toes".  The Maintenance crew there were his friends and took very good care of him. Cameron is survived by two sisters, Sharon Grenier (partner Randy with whom Cameron very much enjoyed sparring on the telephone and in person), and Carol Donald (husband Butch), as well as two brothers, Clint Campbell (wife Brenda) and Scott Campbell.  He also has a surviving Uncle, Bernard Corliss and surviving aunts,  Edna Corliss, Clara Martin and Edna Campbell.  There are too many cousins to list here, as well as nieces, nephews, great nieces and great nephews, but know that he loved you all.   He had a great big heart filled with love for all of his family whether he had seen you in 30 years or not. He was predeceased by his parents, and a brother, Clarence (Junior) Campbell, Jr., as well as many aunts and uncles and cousins. Cameron never let his disabilities stop him from enjoying life and with what little he had, was as happy as anyone could be.  If the world had more people like Cameron in it, it would be a better place. He will be interred on Friday, July 3rd, at 1:00 PM in the Williamstown Cemetery.  A full celebration of Cameron's life will be held at a later date. In lieu of flowers, please send donations to the Hospice organization in your area. Arrangments are in the care of the Pruneau-Polli Funeral Home, 58 Summer Street in Barre.

The family of Cameron L. Campbell created this Life Tributes page to make it easy to share your memories.

Send flowers to the Campbell family.