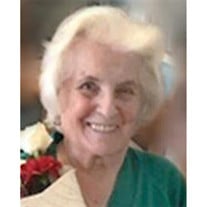 BARRE-Consuelo "Connie" Aja Hebert Consuelo "Connie" Aja Hebert, 91, of Snow Avenue, Barre, Vermont, passed away on November 30, 2021 at Cathedral Square in Burlington with family by her side. Born in Websterville, Vermont, on April 30, 1930 to parents Higinio and Angela Teresa Aja who immigrated from Spain, arriving at Ellis Island. Her father came to Websterville to work in the granite quarry. After their house in Websterville burned, the Aja family moved to the city of Barre where Connie lived the rest of her life. It was a large, loving and many times noisy family of 7 children. Connie was the 5th child in line. Connie and Bernard "Bernie" W. Hebert were married on October 14, 1950 at St Monica Church and brought up their three children in Barre where they worked and played hard. Connie worked for the Vermont Department of Education in Montpelier from 1957 to 1992. Throughout those 35 years she was secretary to many supervisors in the administrative units and Commissioner's office. In 1976 she moved to the position of Administrative Assistant to the Deputy Commissioner until her retirement. She was known for her extensive knowledge of the history and regulations of the Department of Education for which many Superintendents of Schools in Vermont contacted her frequently. And of course she was also known for her delicious rum cakes. Connie's retirement party on April 24, 1992 was a testament to how much she was loved and respected by everyone at the Vermont Department of Education. After retirement, Connie volunteered at St. Monica-St Michael School, on Summer St in Barre. She loved the school and the people she worked with. Connie and Bernie loved camping beginning with a tent and progressing to their large RV. They both loved boating and water skiing on Lake Champlain. In winter they enjoyed riding their snow machine to the Canadian Club. And any time of the year they loved going dancing with her brothers and sisters and friends. They were masters of the jitterbug. When winters became more difficult, they purchased a home in Winter Haven, Florida which they enjoyed until Bernie passed away on May 10, 1998. She was a member of Vermont State Employees Association, Canadian Club, American Legion, and the Barre Lodge of the Elks. Survivors include her daughter, Angela and her husband George Robinson of Grand Isle, VT ; Her two sons Gary Hebert and his wife Sharon of Barre, VT ; and Bruce Hebert and his wife Kim of Devens, MA. Three Grandchildren Erin Brittain and husband Jonathan of Golden, CO; Jessica Manning-Wilder and wife Erica of Barre, VT; and Kevin Hebert and wife Sara of Barre, VT. 10 Great Grandchildren: Eben Brittain, Griffen Hebert, Dylan Hebert, Brooklynn Hebert, Madison Hebert, Elijah Farnsworth, CooperFarnsworth, Kaleb Farnsworth, Peyton Farnsworth and Storm Farnsworth; three Great Great Grandchildren, Jamison Farnsworth; Kiara and Quarry Hebert. Connie's two adoring brothers E. Joseph Aja, of Montpelier, VT; and Joaquin Aja and husband Dennis Owen of Puerto Vallarta; Many nieces, nephews and cousins. She was predeceased by her parents, brothers Gabino Benny Aja, Jesus Jerry Aja; sisters Encarnation Connie Norris, Aurora Dot Borne. Private services and burial will be held for the family only for everyone's safety. Family members may contact Angela Robinson or other family member for details. Contributions in Connie's loving memory may be made to St Monica-St Michael School, 79 Summer St, Barre, VT 05641.

The family of Consuelo "Connie" A. Hebert created this Life Tributes page to make it easy to share your memories.

Send flowers to the Hebert family.