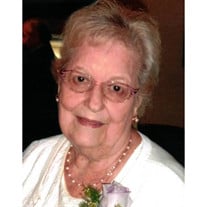 BARRE, VERMONT -- Delores Pruneau Davis, 89, of Wildersburg Common, died peacefully at home in the afternoon of February 18th. Her wish was to return home from the hospital and see her nine children before she passed. Her children arrived from far and near to comfort her in her final days.  A devout Catholic, she attended services every Sunday and holy days until she was unable. She will be greatly missed. Delores was born to her late parents Alfred and Florence Merchant Pruneau on July 18th, 1931 in Barre, Vermont.  Delores, known to all as "Dolly", attended St. Monica's Graded School.  She often spoke fondly of a nun who taught her to play the piano.  She then attended Spaulding High School graduating in 1949.  She was a beautiful, spirited and proud cheerleader.  She met her late husband Thomas C. Davis at Spaulding and they married in1952.  An inseparable pair, they were happily married for sixty-five years and had nine children. A woman of her time, she was content to stay home and care for her large and growing family.  She was kind, compassionate and fair. She taught her children to meet challenges in life with love, humor and respect. She was the glue that held our family together. No matter the circumstances her 9 children knew they could come home and have a soft place to fall with unspoken forgiveness. When the children were young, they would gather around their Mother to recite their prayers. She spoiled them with her meticulously prepared meals of which were on time, hot, delicious and always including dessert. She embraced the holidays in true celebration. Out came her beautiful decorations, silverware and fine china making for festive family gatherings. She loved the ocean, especially Ogunquit Beach, Maine. Every summer the whole family would go on vacation. She would amazingly pack everything we needed for eleven people. What remains are fond memories of campgrounds, zoos, amusement parks and beaches. Being a woman of great intelligence and humor, family and friends sought her counsel. She had a unique ability to size up a situation and patiently offer support with a touch of common sense. Good natured and a great story teller, she never tired of probing the intricacies of what makes people tick. A dignified woman of simple tastes and pleasures, she was indifferent to wealth, fame and professional success. She was an avid reader and active socially, attending church, chicken pie suppers and family events. She also loved to dance and enjoyed one last dance with her husband just prior to his passing. Delores Pruneau Davis was predeceased by her parents Alfred and Florence Merchant Pruneau, her husband Thomas C. Davis, and her siblings, Arthur Pruneau of Florida, and Joan Leahy of Danbury, Connecticut. She was also predeceased by two grandchildren, Deane Thomas Davis and Bentley Davis Seifer. She leaves behind her nine children and their spouses:  Michael and Sylvia Davis of Barre, Corinne Davis of Montpelier, Linda and Duane Chambers of Brookfield, Julie Davis of Cambridge, Timothy Davis of Ocala, Florida, Daniel Davis and Steve Chandler of Colchester, Dawn and Jay Wolk of Fairfield, Connecticut, David and Danna Davis of Bethesda, Maryland and Richard Davis of Putnam Valley, New York.  She is also survived by ten grandchildren, Justin and Andrea Davis, Christopher and Schuyler Chambers, Jennifer and Sara Davis, Brett and Rachel Wolk, Taylor Davis, and Joshua Davis and her six great grandchildren, numerous nieces and nephews and her eldest sister Corrine Sheridan of Montpelier. A funeral Mass will be held at the St. Monica's Church in May by invitation only, in order to meet the Coronavirus limitations.  Internment will occur following the Mass at the Elmwood Cemetery in Barre. Memorial contributions are encouraged to benefit; St. Monica's Catholic Church in Barre, the Hands at Home Care Services in Waitsfield or Central Vt. Home Health and Hospice in Berlin. Arrangements are in the care of the Pruneau-Polli Funeral Home, 58 Summer Street in Barre.

BARRE, VERMONT -- Delores Pruneau Davis, 89, of Wildersburg Common, died peacefully at home in the afternoon of February 18th. Her wish was to return home from the hospital and see her nine children before she passed. Her children arrived from... View Obituary & Service Information

The family of Delores P. Davis created this Life Tributes page to make it easy to share your memories.