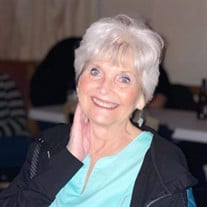 BARRE-Diane Mae Paulger was born on October 7th, 1949 at the Barre Hospital in Barre, Vermont to her parents, Viola (Ladd) Gray and Lynn Copeland Sr. Diane passed on April 18th, 2022 in the comfort of her home surrounded by her family and friends. Diane was the oldest of five siblings. As a child, she spent a considerable amount of time with her grandparents Inez (Potter) and Walter Copeland in Plainfield, Vermont but lived and grew up in Barre. Diane raised five children of her own and went to cosmetology school later in life to become a hairdresser. Diane then spent the next 45 years as a hairdresser, for which she developed a very positive reputation. Diane made many people feel beautiful and important while they sat in her chair. Diane was predeceased by her parents, Viola Gray and Lynn Copeland Sr., her step-father Henry Gray, her daughter-in-law Kim (Drew) Douse, her step-brother Joe Gray and her step-sister Cynthia Buchanan. Diane is survived by her aunts Beatrice Sainz and Claire Ladd; her siblings, Lynn “Butch” Copeland Jr. and his wife Darlene Copeland, Donna Copeland, John and his wife Sue Copeland, and David and his wife Marylyn Copeland; her step-siblings Teresa (Gray) Lusk, Larry Gray and his wife Beverly, Cheryl Gray, and Kelly Welborn and her husband Leo; her children, Renée Orvis and her fiancé Dana Nichols, Jason Douse, Jeremy Douse and his wife Dianna Leinberger, Amanda Guazzoni, and Lucas Paulger and his wife Helga-Gabriela Paulger; her grandchildren, Sophronia Rochford and her husband William Rochford III, Henry Orvis, Ella and Noah Douse, Kaitlyn Douse, Cora Guazzoni and Everett Partlow, and Ezra Paulger; and her great-grandchildren, Skylar Rochford and William Rochford IV. Diane is additionally survived by numerous cousins, nieces, nephews, and great-nieces and great-nephews. Diane enjoyed life by cooking meals, kayaking, painting and dancing. Diane was a monumental part of the community. Not only was she warm like the tea she always served, but she was an unstoppable storm when she wanted to initiate change or needed to motivate anyone around her. She had a smile and a hug for anyone who needed it. She was sweet like the candy she kept in her coat pockets. She will be loved always and missed by all who knew her. There will be no funeral service, but a celebration of life will be announced at a later date. Donations in Diane’s memory can be donated to the Pancreatic Cancer Action Network at pancan.org; to the Kim Douse scholarship fund by making checks out to BEA and mailing to SHS 155 Ayers ST, Barre VT 05641 care of Heather Stalling; or Central Vermont Home Health and Hospice at cvhhh.org.

BARRE-Diane Mae Paulger was born on October 7th, 1949 at the Barre Hospital in Barre, Vermont to her parents, Viola (Ladd) Gray and Lynn Copeland Sr. Diane passed on April 18th, 2022 in the comfort of her home surrounded by her family and friends. Diane... View Obituary & Service Information

The family of Diane Mae Paulger created this Life Tributes page to make it easy to share your memories.

Send flowers to the Paulger family.