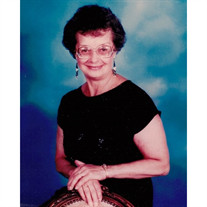 DOROTHY  E.  DURANLEAU BARRE CITY   -   Dorothy E. Duranleau, 92 of Smith Street passed away Wednesday, May 6, 2020 at the Woodridge Nursing Home in Berlin, VT. Born om April 4, 1928 in Orange, VT, she was the daughter of the late Bert and Elizabeth (Macia) Jerry. Dorothy attended Cutler Corner School in Orange, VT and Spaulding High School. As the only girl in the family, she had little time for activities; she spent a lot of time picking and canning berries and vegetables. She enjoyed going to a few dances with her brothers. In 1963 she started working at the Grand Union Store where she was employed for 35 years, retiring in 1995. In January of 1946, she married Carroll (Toni) Weeks in St. Monica's Catholic Church in Barre.  He passed away in December of 1974.  She later married Norman Duranleau in Mother Cabrini's Catholic Church in East Barre in 1980. They made their home in Orange, VT.  He passed away in October of 2001. She later moved to North Barre Manor for 8 years, before moving in with her son Patrick Weeks. Due to failing health she then resided Woodridge Nursing Home in Berlin. She was a member of St. Monica Catholic Church of Barre. Survivors include 2 sons, Patrick Weeks of Barre and Michael Weeks and wife, Penny also of Barre; two daughters, Diane Chioldi and husband, Dennis, of Barre and Pamela Bagalio and husband, Steven also of Barre; two step children, Roger Duranleau and wife, Roberta of Hawaii and Robert Duranleau and wife, Claudia of California and 15 grandchildren and 18 great-grandchildren as well as many nieces and nephews. Besides her parents and husbands, she was predeceased by one son, Roger Weeks. To honor her wishes, there will be no calling hours.  A graveside service will be held at the convenience of the family at St. Sylvester Cemetery in Lower Websterville, VT. The family would like to take this opportunity to express their deepest appreciation to the staff from Home Health & Hospice and the Woodridge Nursing Home for their special care and consideration during her illness. Contributions in her memory may be to Central Vermont Home Health & Hospice, Inc., 600 Granger Road, Barre, VT 05641. Arrangements are in the care of the Pruneau-Polli Funeral Home, 58 Summer St., Barre, VT.

DOROTHY  E.  DURANLEAU BARRE CITY   -   Dorothy E. Duranleau, 92 of Smith Street passed away Wednesday, May 6, 2020 at the Woodridge Nursing Home in Berlin, VT. Born om April 4, 1928 in Orange, VT, she was the daughter of the late Bert and... View Obituary & Service Information

The family of Dorothy E. Duranleau created this Life Tributes page to make it easy to share your memories.

Send flowers to the Duranleau family.