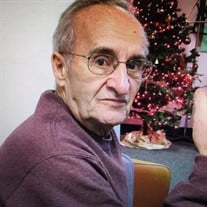 BARRE – Edmond Lehoux passed away peacefully at home on May 8, 2022, surrounded by his family. Born in St. Jacques Le Majeur, Quebec, July 22, 1935, he was the son of Napoleon and Alice Lehoux (Bolduc). On August 18, 1956, he married Claudette Domon in St. Gerard, Quebec, where they resided until 1960 when they moved to Frankfort, Maine. In 1963, the family moved to Barre where they made their home. He was employed as a Granite worker his whole career and was incredibly proud of the pieces he made. He spent his whole life outdoors and loved camping, boating, and hunting. One of his favorite summer activities was taking his annual trip to Old Orchard Beach, Maine. He was predeceased by his loving wife of 52 years on November 15, 2008. After retirement he could be found every morning with his coffee group, walking around Barre, and sitting in his truck watching people drive by. He loved spending time at the lake, playing horseshoes, of which he was state champion and collected many trophies. He enjoyed playing cards, pool, and watching hockey. He could be found dancing at the American Legion many Saturday nights. Anyone who knew him will most certainly remember his sense of humor and smile. He leaves behind his girlfriend of 13 years, Barbara Goyette, his daughters Linda Doyle and her husband Curt Doyle of Barre Town and Susy Savoie of South Barre. He has two granddaughters, Abby Savoie and Ally Savoie, both of South Barre, and two grandsons, Zachary Doyle of California, Jared Doyle and his wife Julie Doyle of Massachusetts and great-grandson Kieran Doyle. All of his brothers and sisters still live in Quebec; Jacques and Monique Lehoux, Francine Lehoux, Renee and Denise Lehoux and Louisette and her husband Conrad Tremblay. He also leaves behind many nieces, nephews, brothers and sisters-in-law. We will always cherish the happy memories of time spent together, especially during the holidays and special occasions. There will be a short Mass at St. Monica Church at 11:00 am on June 25, 2022. Burial will follow the Mass at St. Sylvester’s Cemetery in Lower Websterville. There will be no calling hours. In lieu of flowers donations can be made to Central Vermont Home Health & Hospice or Meals on Wheels Central Vermont. Arrangements are in the care of the Pruneau-Polli Funeral Home, 58 Summer Street in Barre.

The family of Edmond Lehoux created this Life Tributes page to make it easy to share your memories.

BARRE – Edmond Lehoux passed away peacefully at home on May 8,...

Send flowers to the Lehoux family.