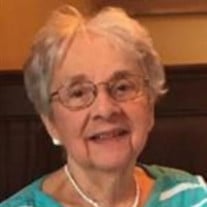 HAMDEN CONN.-Elaine Realini Jacques, 91, of Hamden, Connecticut, formerly of Jacques Street in Barre passed away on June 11, 2022, surrounded by her loving family. Born in Littleton, New Hampshire on July 23, 1930, she was the daughter of the late John and Florence (Coyer) Realini. She moved to Barre at an early age, where she attended St. Monica School and Spaulding High School (Class of 1949). On June 8, 1957, she married the late Philip Jacques in St. Monica Catholic church. They made their home in Barre where she lived until Philp passed away. She moved to Connecticut to be close to her only daughter, Candace and her family. Elaine enjoyed cooking, working around her house, shopping trips and traveling. At a very early age, Elaine started tap-dancing and appeared in theaters and fairs and was known as the “Shirley Temple of Barre”. She was a member of St. Monica Catholic church, Catholic daughters of America, American Legion women’s Auxiliary and the Vermont Association of Insurance Women. Elaine is survived by her daughter Candace Cotto, and husband Samuel Cotto, also her grandson, Justin Cotto, as well as numerous nieces and nephews. She was predeceased by 2 brothers, Jason and Douglas, both of North Carolina. A Mass of Christian burial to celebrate her life will be held on Thursday, June 16, 2022, at 11am in St. Monica Catholic church in Barre. Burial will follow the Mass at Hope Cemetery in Barre. There will be no calling hours. Arrangements are in the care of the Pruneau-Polli Funeral Home, 58 Summer Street, Barre, Vermont. Those wishing to express online condolences may do so at: www.pruneaupollifuneralhome.com

HAMDEN CONN.-Elaine Realini Jacques, 91, of Hamden, Connecticut, formerly of Jacques Street in Barre passed away on June 11, 2022, surrounded by her loving family. Born in Littleton, New Hampshire on July 23, 1930, she was the daughter of the... View Obituary & Service Information

The family of Elaine L. Jacques created this Life Tributes page to make it easy to share your memories.

Send flowers to the Jacques family.