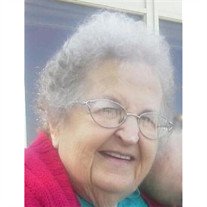 EUNICE E. COLOMBE BARRE- Eunice Colombe, 93, passed away on Sunday, November 21, 2021, at the Berlin Meadows Nursing and Rehabilitation Center, where she had resided since June 1, 2018. Despite having received both vaccine doses last winter, she tested positive for COVID-19 on October 20. Born in Barre City, Eunice was the last surviving child of eight born to Ernest Hutchinson and Hazel (Clark) Hutchinson. Her lifespan exceeded the next longest by fourteen and a half years, a feat achieved in part due to the extensive oversight and support from her daughter. As a child she lived in Graniteville, entering foster care near her seventh birthday. She attended South Barre School. After aging out of state care at 21, she worked as a personal care attendant, dishwasher, and other typical work available to women, with her longest job as a presser at Malnati Dry Cleaners. Due to the lack of childcare options, she exited the workforce to become a stay-at-home mother in 1969. Living in a time and place where an eighth grade education was considered sufficient for girls, especially disadvantaged ones, she always felt cheated out of her education and stressed to her children the importance of doing well in class, including staying after school to get help from the teacher. She enjoyed jigsaw puzzles, television and her cat, and deeply mourned the loss of contact with Missy when she entered the nursing home. She will be remembered for walking everywhere, from taking her young children along on errands "upstreet" in a Radio Flyer wagon, and continuing through her seventies to visit a friend at the Bonin Rest Home, and for her sweetness, loyalty and unpretentiousness. She is survived by her children, Christina Colombe and Walter Colombe and his wife Sheila, all of Barre.Memorial contributions may be made to the North Country Animal League, 16 Mountain View Meadow Road, Morrisville, VT 05661 There will be no calling hours. A graveside service will be held on Monday, November 29, 2021, at 11am at Hope Cemetery in Barre. Arrangements are in the care of the Pruneau-Polli Funeral Home, 58 Summer Street in Barre.

EUNICE E. COLOMBE BARRE- Eunice Colombe, 93, passed away on Sunday, November 21, 2021, at the Berlin Meadows Nursing and Rehabilitation Center, where she had resided since June 1, 2018. Despite having received both vaccine doses last winter,... View Obituary & Service Information

The family of Eunice E. Colombe created this Life Tributes page to make it easy to share your memories.

Send flowers to the Colombe family.