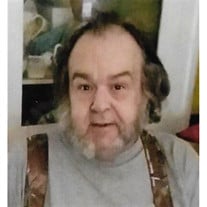 MONPELIER- Francis Edward Hathaway Jr., 64, passed away peacefully on Friday, July 31, 2020 at his Mother's home surrounded by his family and his best friend after a brief illness. Born, March 28, 1956 in Woodsville N.H., he was the son of Francis Edward Hathaway Sr. and Vivian (Aldrich) Hathaway, Bennett. Francis was raised in Bradford Vt and attended Bradford Elementary, Bradford Academy and Oxbow Highschool. Francis loved cooking and worked in several restaurants in the area. He loved to play the drums and as a teenager, he had a small band with his sister Becky, Peter Buskey and Brian Demers and had obtained several engagements to play. Francis loved drawing, painting, and putting models together. Growing up, he played in the cow pasture behind their home belonging to his grandparents, Leon and Winifred Norcross. He loved adventure, making trails, building forts, and cooling off in the brook. Francis built a tree house in a pine tree next to his home on Fairground road in Bradford, it lasted way beyond those childhood years. He loved to go into George Barbers junk yard and sit and play in the vehicles. He loved bicycling all over Bradford, and swimming lessons at Baldwin bridge. Family was especially important to Francis and he loved family get togethers at Gramma and Grampa Norcross at Christmas time, and family reunions on Hauls lake. He loved rides in the car with Mom and Dad on the back roads up Goshen Road. During the winter months, Francis enjoyed a flying saucer "S" track that his Dad Francis and Mom built with all the snow. It was the best place to slide in the whole world and at times would take the sled to the top of the cow pasture all the way down acrossed the lawn. He also loved snowmobiling through the trails and around the cow pasture. Francis resided at Monsignor Crosby Avenue in Montpelier Vt where he could be close to his mother Vivian, and his beloved stepfather, Ralph (Joe) Bennett. Francis continued to enjoy listening to music, playing his drums, drawing, painting and putting models together. He had his parakeets who kept him company as if they were cheering him on. Francis is survived by his Mother Vivian, and beloved stepfather Joe, his sister Becky, two brothers, John and Troy, as well as a special friend, Irene Fisher and many nieces, nephews, cousins and Aunts and uncles. Francis was predeceased by his father, Francis Edward Hathaway Sr. There will be no calling hours. A celebration of Life service is planned for September 6 at 2:00pm at Faith Community Church, 30 Jones Brothers Way in Barre. Pruneau-Polli Funeral Home, 58 Summer Street in Barre assisted the family.

MONPELIER- Francis Edward Hathaway Jr., 64, passed away peacefully on Friday, July 31, 2020 at his Mother's home surrounded by his family and his best friend after a brief illness. Born, March 28, 1956 in Woodsville N.H., he was the son of Francis... View Obituary & Service Information

The family of Francis E. Hathaway Jr. created this Life Tributes page to make it easy to share your memories.