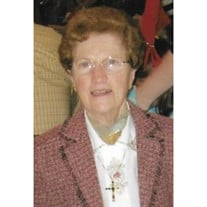 Irene (Vaillancourt) Goulet Barre - Irene (Vaillancourt) Goulet, 89, of Barre, Vermont, passed away on November 24, 2021, at Woodridge Nursing Home surrounded by family. Born in Barnston, Quebec, Canada on May 12, 1932, Irene was the daughter of Emile and Marie (Morin) Vaillancourt. She attended school and was raised on their family farm until October 26, 1959, when she married Fernand Goulet in Stanhope, Quebec, Canada. In January 1961, they moved on to their next adventure in Barre, Vermont where English became their second language, they made their home, and raised their family. She proudly became a United States Citizen on November 17, 1993, in St. Albans, Vermont. Irene was a long-time, devoted member of the St. Monica Catholic Church in Barre, Ladies of St. Anne, and the Barre Area Senior Center. Her favorite pastimes included: going for walks, cooking, attending church, and spending time with her loved ones. Additionally, she loved to travel which included trips to Alaska, Mexico, Spain, and many trips back to her native land in Canada. She leaves behind two sons Yves Goulet and his wife Debbie of Barre, Vermont, and Gary Goulet and his wife Tammy of Sanford, North Carolina and one daughter Lynn (Goulet) Crawford and her husband Thomas of Barre, Vermont. Also, five grandsons: Mathew, Justin, Dillon, Nicholas, and Adam and one granddaughter Nicole and many nieces and nephews. She was predeceased by her parents Emile & Marie, her husband of 30 years Fernand, who passed on September 4, 1990, and eleven siblings including seven brothers: Pierre, Lionel, Omer, Charles, Henri, Gerard, and Louis and four sisters: Imelda, Aurore, Dorothy, and Germaine. Irene will always be remembered as a devoted wife, mother, grandmother, and member of her church. She was a kind, loving and compassionate person who was faithful to her family. Her kindness and positivity will continue to radiate upon us all; she will be missed dearly. Calling hours will be held on December 5, 2021, from 6:00pm to 8:00pm at Pruneau-Polli Funeral Home, 58 Summer Street, Barre, Vermont. Additional parking is available across the street at St. Monica Catholic Church. A Mass of Christian Burial and celebration of her life will be held on December 6, 2021, at 11:00, at the St. Monica Catholic Church. Burial will follow at Hope Cemetery in Barre. In lieu of flowers, contributions in Irene's memory may be made to the Central Vermont Council on Aging, 59 North Main Street # 200, Barre, VT 05641. Arrangements are in the care of the Pruneau-Polli Funeral Home, 58 Summer Street in Barre.

The family of Irene L. Goulet created this Life Tributes page to make it easy to share your memories.

Send flowers to the Goulet family.