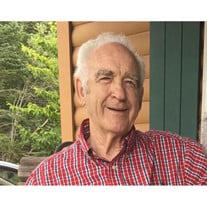 Washington - Jacques (Jake) Boudreault, 81 of Washington Vermont, passed away unexpectedly on May 28, 2020 at his home. Born December 9, 1938, Jacques was the son of Adelard and Marguerite Boudreault. Jacques was born in Lac St. Jean, Quebec, Canada, and was one of 9 siblings who lived on the family's farm in Coaticook, Quebec, Canada. He started working at an early age as a lumberjack and met and married the love of his life Stephanette (Boily). They moved to the United States in 1965, where they resided in Barre, Vermont for over 40 years, before moving to Washington, Vermont. Jacques was a gifted stone cutter that worked in the industry for over 35 years. One of his greatest passions was his Christmas tree and wreath business which brought him such great joy to be with his family and bring holiday spirit to hundreds of loyal customers for many years. Jacques was also a lifetime member of the Canadian Club. Jacques was a devoted father, grandfather, and great-grandfather, who loved and cherished spending time with his family. Supporting and caring for his family and friends was what Jacques did, he would give you the shirt off his back. Known for his wit and sense of humor, he loved to tell jokes, and make everyone laugh. He enjoyed spending time at the family camp in Norton, Vermont, taking his wife Stephanette for rides in the car, having breakfast with his friends at Soups and Greens in Barre and with his family at Café Central in Coaticook, Québec, Canada, attending his children and grandchildren's events including military, school and sports, and visiting his family in Canada, and connecting with friends and relatives on his iPad through Facebook. Jacques touched countless lives and has left a huge void in many people's hearts. Although the family has lost their patriarch, his legacy will remain in their hearts forever as he watches over them from heaven. Jacques is survived by his loving wife Stephanette of 60 years, his three children, Mario (Rhonda Richards), Gilles (Victoria Canas) and Sylvie (Fred Blanchard), grandchildren Christopher Bylow (Sara Calcagni), Jennifer (Colt Knipp), Katie Bylow (Travis Welch), Alyson Fae (Steve Smith), Alexis Blanchard and Isabella Boudreault, his great grandchildren Kaylee and Taylor Welch, Jacob and Lauren Bylow, and Amelia and Violet Knipp. Also survived by sister, Rachel (Edward Quintal), brother Raymond (Claudette), sister Marthé Tremblay, sister Jeannine (Lionel Richard), sister Denise (Gerard Boily), brother-in-laws Jules Boily, Yvan Boily (Angèle), sister-in-laws Jacqueline (Jean-Pierre Laliberte) and Madeleine Valcourt. Jacques is predeceased by his parents Adelard and Marguerite, his brothers Marcel and Camille, infant sister Louisette, brother-in-laws Richard Tremblay, Edgar Boily (Liliane), Yvon Boily (Bernadette) and sister-in-laws Laurette Couturier, Camille Mercier, Hermance Boily (Roger Dufault), Pauline Boily (first husband Andre Fortin, second husband Germain Martel). A mass of Christian burial will be held at St. Monica's church in Barre at a later date, followed by a graveside memorial to be determined. Arrangements are in the care of the Pruneau-Polli Funeral Home, 58 Summer Street, Barre Vermont.

Washington - Jacques (Jake) Boudreault, 81 of Washington Vermont, passed away unexpectedly on May 28, 2020 at his home. Born December 9, 1938, Jacques was the son of Adelard and Marguerite Boudreault. Jacques was born in Lac St. Jean, Quebec,... View Obituary & Service Information

The family of Jacques E. Boudreault created this Life Tributes page to make it easy to share your memories.

Send flowers to the Boudreault family.