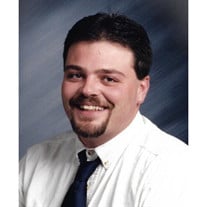 JAMIE L. LESSARD BARRE-Jamie L. Lessard, 47, of Barre City, passed from this life by his own choosing on Tuesday, June 15, 2021, following many years of painful disability and emotional pain. His family prays that although he left us far too soon, he is now at peace and no longer must endure the physical pain of the last few years. Jamie was born on November 3, 1973, the son of James Lessard of Graniteville, Vt. and the late Marie (White) Lessard.  Jamie's mother, Marie, passed away only four months prior to his death after her own long illness. Jamie attended Barre City schools and was known for his boisterous character and penchant for pushing the limits, such as his love of the rock band "KISS" and his enjoyment of any type of fast moving vehicle. He enjoyed refurbishing cars with his father, Jim, particularly a 1985 model Mustang he had in his youth and a 1965 Nova that he spent considerable time and effort in customizing.  He also loved snowmobiling as a young man until an unfortunate accident in his early twenties resulted in the amputation of his lower leg, an injury that forever affected his quality of life. Jamie was an avid hunter and fisherman prior to his injury and was successful almost every deer season and caught many sizable fish in local lakes and ponds.  He loved the outdoors. Jamie held various jobs in his early years, including Vermont Foodbank, and for many years was a Times Argus rural delivery carrier, amassing thousands of miles on his routes over the several years he was employed by the newspaper.  Jamie also worked for a few years for a building custodial company. Jamie never married but he did have two "girls" in his life: his two pedigreed Boxers - Shania and Jazz, who were his beloved companions for many years. Jamie is survived by his father, Jim Lessard of Graniteville, as well as his aunt and uncle, Margaret & Richard Lessard of Berlin, and his cousin, Heather Warmouth and her husband Travis and their son, Leo.  He is predeceased by his mother, Marie, and his grandparents, Leo & Francese Lessard, formerly of Graniteville. A graveside service and burial will be held at St. Sylvester's Cemetery in Websterville on Saturday June 26, 2021 at 11:00 a.m.

JAMIE L. LESSARD BARRE-Jamie L. Lessard, 47, of Barre City, passed from this life by his own choosing on Tuesday, June 15, 2021, following many years of painful disability and emotional pain. His family prays that although he left us far... View Obituary & Service Information

The family of Jamie Lee Lessard created this Life Tributes page to make it easy to share your memories.

Send flowers to the Lessard family.