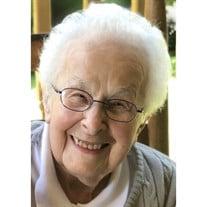 BARRE - Jennie E. Altavilla, 104, of Elm Street passed away on Tuesday, June 30, 2020 at home with her family by her bedside. Born April 6, 1916 in Bridgeport, Connecticut, she was the daughter of Lorenzo Silvestro and Damiana (Diane) Silvestro. Jennie graduated high school in 1934 during The Great Depression and eventually worked at Remington Arms during the Second World War. On July 4th, 1946 she married Lawrence Altavilla in Stratford, Connecticut.  After their marriage, they made their home in Bridgeport, Connecticut. After spending some years raising her two children, Jennie returned to work at Moore Special Tool for 20 years before her retirement. After the birth of her first grandson, she and her husband moved in with her daughter and son-in-law in Barre, Vermont. There she enjoyed helping with her grandchildren. She was a very devout Catholic and an active member of St. Monica Parish. It wasn't until her later years that Jennie had the leisure to enjoy reading, especially mystery novels, with Louise Penny being her favorite author.  She also enjoyed occasional visits to art museums and fall foliage drives throughout Vermont.  Even at 104, she had a sharp mind and was very adamant about letting you know she was capable of doing things for herself. But most of all, she loved spending time with the family when her children and grandchildren were all together. Jennie is survived  by her daughter, Marie Ritzo of Barre; her granddaughter Simona Moss and her husband Jonathan; her grandson Charlie Ritzo and his wife Deanna; her granddaughter Sonia Altavilla; her granddaughter Elizabeth Ritzo; her grandson Robert Altavilla; her great grandsons Tyler Moss and Samuel Ritzo; her sister Tina Iannotti and several nieces and nephews. In addition to her parents, she was predeceased by her husband Lawrence Altavilla; her son Larry Altavilla; her son-in-law Joseph Ritzo; as well as her brothers Joseph Silvestro, Ralph Silvestro, Larry Silvestro, Albert Silvestro, and Sister Louise Danieli. There will be a private graveside service at Hope Cemetery. Family and friends may attend the memorial service that will take place sometime next year.  In lieu of flowers, memorial contributions may be made to Central Vermont Home Health and Hospice at 600 Granger Rd, Barre, VT 05641. https://www.cvhhh.org/donating-to-cvhhh/make-an-online-donation-2/. Or donations can be made to St. Monica Parish, at 79 Summer Street, Barre, Vermont 05641. https://stmonica.vermontcatholic.org/online-giving. Arrangements are in the care of the Pruneau-Polli Funeral Home, 58 Summer Street in Barre.

BARRE - Jennie E. Altavilla, 104, of Elm Street passed away on Tuesday, June 30, 2020 at home with her family by her bedside. Born April 6, 1916 in Bridgeport, Connecticut, she was the daughter of Lorenzo Silvestro and Damiana (Diane) Silvestro. Jennie... View Obituary & Service Information

The family of Jennie E. Altavilla created this Life Tributes page to make it easy to share your memories.

Send flowers to the Altavilla family.