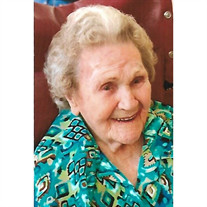 Johanna Birkner DaviesSeptember 12, 1919- May 11, 2020 BARRE- Our 100 year old Angel is now with God in Heaven... Johanna Birkner Davies passed away peacefully on Monday, May 11, 2020 in The Barre Gardens Nursing Home. We all lost our centerpiece and family matriarch who held everyone together. During this horrible pandemic, three family loved ones were allowed to visit, prior to her passing. This was a very special gift to be able to stay with her at her bedside. Real, and not virtual hugs and kisses were plentiful as we said our final and very emotional Goodbyes. Where should we begin with a lady who is 100 years old? Johanna was born on September 12, 1919, in Neisse, Germany to a very large family with 16 brothers and sisters. In her early days, she worked as a governess for two lovely children in Berlin, and then pursued a career in Nursing. However, this was cut short with the news that she would have to be called home to care for an ailing sister. While in Berlin, she attended the 1936 Summer Olympics, and watched as Adolf Hitler and his entourage stood and rudely walked out as Jesse Owens won four Gold Medals for America. In 1944, Johanna, with one bicycle, a sister, and two friends were forced to flee their homeland, as Poland was ready for an evasion. The four of them traveled for nearly a year, never knowing what they would eat and where they could find shelter along the way. Starving at one point, Johanna (borrowed) a cabbage from a large garden, only to be reprimanded by a farmer and forced to return it. That would have been their only food for the day. After moving far enough out of harm's way, she located a sister in Northern Germany, and then connected with some of the rest of her family in Bad Mergentheim, Germany. Here, the family was now finally together and living in a medieval castle until 1952. At this time, seeking safety and freedom, Johanna, and her six year old daughter, boarded a troop ship and headed for New York Harbor. She and Lola were ecstatic at their first glimpse of the Statue of Liberty, and all of those huge tall buildings. Her first American home was in New Jersey living with family again. Then, she moved to Florida, and finally when her daughter was married, she accompanied the newly married couple to our beautiful little State of Vermont. Johanna absolutely loved all children and animals. She just adored her grandchildren and great grandchildren. Her eyes would sparkle and light up whenever they came to visit. She also held very close to her heart her only daughter, Lola, and son-in-law, Steve. She was a loving and genuine family person! During her final three years, Johanna was the center of attention at Barre Gardens. She loved everyone, and was loved by all, both residents and staff. One of the most beautiful moments at Barre Gardens was the celebration last September of her 100th birthday. All of her family, many residents, and most of the staff attended, and Johanna enjoyed three pieces of birthday cake and a glass of champagne. Johanna was a master of all trades. The end results of her knitting and crocheting were remarkable and beautiful. The entire family will never forget the wonderful hats, mittens, sweaters, scarves, and blankets. She even knitted her daughters socks and underwear to keep her warm when she was very young in Germany. She was a fantastic cook, especially with special German recipes. Omi was so happy to teach her loved ones the cooking and baking skills that she had perfected. She also was a skilled hairdresser. Who will ever forget the Beatle haircuts showcased her three grandsons! Johanna is survived by her only daughter, Lola Clark, and husband, Stephen of East Montpelier; Kevi, and Shannon Sheffert and Alec of Duxbury, Vermont; Kristopher and Emily Clark of San Jose, CA; Korey Clark of East Montpelier; and her two loving great grandchildren, Stephen and Kaleb Clark, who live in both Duxbury and Barre Town. She is also survived by her nephews, nieces and families in Germany. Johanna was predeceased by her sixteen brothers and sisters and spouses; her husband, Tommy; her mom and dad; and her extended family members, Kay, Lynn, and Marcia Clark. A St Monica Church Mass and a Memorial Service in Hope Cemetery will be announced at a later time, once conditions are healthy and safe. WHAT A LONG AND WONDERFUL LIFE! We will forever love and miss you, Johanna, Mumsie, Omi, and GiGi. Johanna knew the real feeling of hunger as she left her homeland and gained her freedom... In lieu of flowers, her Family is requesting donations be made to The Vermont Food Bank, 33 Parker Road, Barre Vermont 05641. Arrangements are in the care of the Pruneau-Polli Funeral Home, 58 Summer Street in Barre Vermont.

The family of Johanna M. Davies created this Life Tributes page to make it easy to share your memories.

Send flowers to the Davies family.