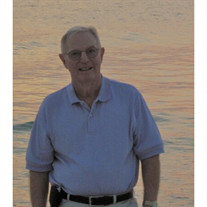 MONTPELIER- John Ormsby passed through heaven's door on December 14, 2020 at The Gary Residence in Montpelier, Vermont after a brave two month battle with cancer. He expressed gratitude for each person at The Gary Residence and Westview Meadows for their care and kindness from the day he moved in, and more so after his time in hospice. John was born in Montpelier, VT on June 5, 1931 to Waterman Guy and Hazel Edith Ormsby. He attended various schools including Montpelier High School and Burlington High School. He was 89 years old. We honor his extraordinary life with Agnes, and credit him for keeping them going from one place to another while enjoying their retirement. He especially enjoyed his time in "sunny Southwest Florida" where he could be warm and avoid the winter. He was a genuine and helpful person who made a difference in so many lives, many he knew, and many he didn't. Above all else, John was a husband, father, and Jiddo to his family. His number one priority was his wife, Agnes, and his love for her became apparent to others as time went on. John worked hard to provide for his family so they would have everything they needed or wanted and then some. Besides his family, John's greatest accomplishment was Ormsby's TV and Appliance where he showed a remarkable energy and drive that led to its success. He never thought twice when helping others, be it his family, his employees, or people he hardly knew. He always made sure each store employee had a turkey for Christmas and each one was treated as family. There is a wide net of people who worked for Ormsby's TV and Ormsby's Computer Store and signing up for hire came with the bonus of adoption into the Ormsby family. As the business succeeded, John was generous to his employees so they could benefit from that success. His store became one of the anchor stores in "friendly downtown Barre" during a time full of tradition, and a community that cared for and took care of one another. He had many friends during his lifetime and maintained contact with them as best he could. The Red Sox could have won the World Series every year if only they could hear him shouting at them. His other joy in life was playing golf with anyone and everyone he could. And who knew that the silent ghost in a sheet who visited his neighbors on Halloween was him? He so enjoyed doing that. During the final months of his life, John bravely fought a difficult battle with cancer. He relied on his children to help him weather the storm and to help care for Aggie. This time proved to be a true test of his faith yet he remained devoted to his Catholicism up until the end. John became a Catholic and was baptized in Korea during his tour of duty. When his comrades went off to mass each week, they included him "Come on, John, time for mass." He decided time and time again to go along and so his faith was formed during those tough times of the Korean War. Besides his wife, Aggie, he leaves behind four children, Mike Ormsby and his wife Mary, Kay Allen and her husband Tom, Gloria Ormsby and her dog Chance, and Brad Ormsby and his wife Sarah. His grandchildren, Julia and Tanner, meant so much to him. He would have done anything he could to help them achieve, or to make them happy. He is also survived by his sister, Gerline Danforth of Essex Junction, VT, Guy Ormsby of Springfield, MA, Rich Ormsby of Creede, Colorado, and Gloria Ormsby of Fort Ticonderoga, NY., many nieces and nephews, his sisters-in-law Kay Sawyer of Williston, VT, and Mary Ann Bizzerzero and her husband Charles of Barre. He is predeceased by his parents Waterman Guy and Hazel Edith, and his sister Juanita. His family thanks the incredible staff at The Gary Residence for the love and care they provided John and his family. We also thank all the nurses and doctors that cared for him at the UVM Medical Center and The Dartmouth Hitchcock Medical Center in Lebanon, NH. He asked each person their name, not out of curiosity, but because he truly wanted to know something about the people caring for him. This was not out of character for John, as he was always ready to meet new people and make them feel his generosity. Donations in John's name can be made to Central Vermont Home Health and Hospice, the American Cancer Society, or to the Alzheimer's Association. Death is humanity's greatest challenge. But know that John lives on, watching us from afar, and telling us to "Be safe and be careful," and to "Do what is right." Let his life be a testament to the capacity of love one can have for others. There will be no calling hours. A Mass of Christian Burial will be celebrated at St Monica Church in Barre. Burial will follow at Hope Cemetery in Barre. Due to the Pandemic, the service will be held privately by the family. Arrangements are in the care of the Pruneau-Polii Funeral Home, 58 Summer Street in Barre.

The family of John L. Ormsby created this Life Tributes page to make it easy to share your memories.

Send flowers to the Ormsby family.