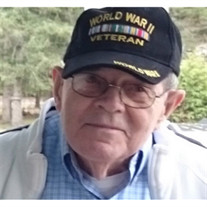 Julian Miana, 96, of Glenmont, NY passed away with his family by his side on his 96th birthday, Thursday, June 17th, 2021 at Our Lady of Mercy Life Center. Julian was born on June 17, 1925 in Barre, VT to the late Eugenia and Manuel Miana. After attending Barre City schools, Julian proudly served in the United States Navy during World War II as a Seaman 1st Class from 1943-1946.  He served his time in many different places including Cape Town South Africa, Scotland, Iceland and Guam.  He was most proud of the two times he participated in the Murmansk Run, a dangerous trip across the North Atlantic where they brought necessary goods to the people of Russia. Julian worked in the granite industry for his entire career.  Returning from the war he went to work in the family business, Usle & Perojo Granite Co.  He later worked at Jones Brothers, where he eventually co-owned H&M sandblast with friend, Bernie Hebert and later retired from Desilets Granite in 1992.  He whistled his way to work each morning with his thermos of coffee and his lunch box then whistled his way back home after the 4:00 o'clock whistle blew. The ultimate family man, Julian valued his family most. Whether it was sitting on the front porch on the 4th of July, decorating the Christmas tree or attending an endless list of children, grand-children or great-grandson events, Julian was there with a smile on his face and pride and love in his heart. He was a man of integrity, loyalty and intense love for his family. Julian was a man of great faith.  He was a lifetime member of St Monica Catholic Church until his move to New York in 2010 when he then became a member of St. Thomas the Apostle Church in Delmar, NY. For more than 40 years he donated his time working the scoreboard at the Barre Auditorium for Spaulding High School basketball. He also enjoyed being a part of the Barre Tournament committee, hosting the girls and boys tournaments each February and March.  Volunteering at the "Aud" was something he loved.  He made lifelong friends and looked forward to it every year.  Julian was a member of the BPOE Elks and played golf at the Montpelier Elks with his son Manuel and  son-in-law Fran. He was a life-long New York Yankees and New York Giants fan in a sea of New England sports fans. He is survived by his wife of 64 years, Loucille, his children Mary Johnson, Julie (Norman) Dutil, Donna Griffith (Mark Marshall),  and his grandchildren; Sarah (Seth) Piontek, Rebecca (Daniel) Somaini, Matthew (Corinne) Johnson, Jennifer Griffith (Sam Comini), Mary-Francis (Matthew) Byrne, and Emily Griffith (Will Heath), great -grandsons; Caleb and Julian Johnson, Carter and Manuel Somaini, Samuel and Ryan Piontek , Mitchell Griffith and Noah Byrne.  He is also survived by his brother, Manuel Miana, his sister-in-law Susan (Peter) Pezzolla, nephews and a niece. He was per-deceased by his parents, his son Manuel Miana, son-in-law Francis Johnson, and brother Joseph Miana. Julian's family would like to thank the staff of Our Lady of Mercy for their wonderful care and love that they showed to our husband/dad.  A special thank you to Jenn, Renee, Ali and all staff in the Guadalupe unit, as well as Maryann, and Cindy who helped to schedule our visits during a very difficult time. A Mass of Christian Burial will be celebrated at St. Monica's Church, 79 Summer Street in Barre on Monday, June 28, 2021 at 11am. Burial will follow at the Vermont Veterans Memorial Cemetery in Randolph, where he will be laid to rest next to his beloved son, Manuel. Friends and family may call at the Pruneau-Polli Funeral Home, 58 Summer Street in Barre on Sunday, June 27, 2021 from 6pm to 8pm. There is extra parking across the street at St. Monica's parking lot. In lieu of flowers, contributions in Julian's memory may be made to St. Monica - St. Michael School, 79 Summer St, Barre, VT 05641.

Julian Miana, 96, of Glenmont, NY passed away with his family by his side on his 96th birthday, Thursday, June 17th, 2021 at Our Lady of Mercy Life Center. Julian was born on June 17, 1925 in Barre, VT to the late Eugenia and Manuel Miana.... View Obituary & Service Information

The family of Julian Miana created this Life Tributes page to make it easy to share your memories.

Julian Miana, 96, of Glenmont, NY passed away with his family...

Send flowers to the Miana family.