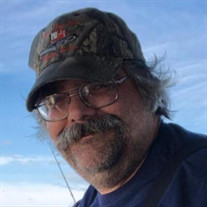 Barre Town-Kevin John Collins, 56 of Barre suddenly took his journey to heaven on January 14th, 2022. Born on December 18th, 1965 to John and Lucille Collins at the Barre City hospital. Kevin lived in Barre most of his life and spent some time in Kansas. As a young boy, his parents would often find him farming at the Bisson's Farm. Throughout his younger years he would work for various farms in the area. Kevin also was an active member of the FFA. He always said he could tame any animal and that they all loved him. He had a pet bull that ate out of his back jean pocket at Lyle Haven Farm. He attended St. Monica's School and later got his diploma from Spaulding High School. He was an altar boy during this time and continued even after high school for a time. In 2006 he met the love of his life Pam Massey, spending 16 glorious years together. Together they shared three children. Jessica Boisvert and her husband Jason, Chantel Marie Korajkic and her husband Asmir, and Alan Storti and his partner Liz. He is also survived by his mother, Lucille Collins, his brother, Michael Collins and wife Bonnie, and niece, Ashley Collins. Kevin was predeceased by his father John Collins and his sister Kristine Collins. As all who knew Kevin knew what an avid fisherman he was. Hunting for those elusive Salmon, then deciding catching a Lake Trout would suffice, but he always said that Bass were stupid fish. He was active in many fishing derbies including the Goosepoint Campground Kids Fishing Tournament with his grandson Jacob, helping him to catch that "big one". Back country roads were a passion he shared with Pam almost nightly. Sunsets and country critters, mostly deer was one of the treasures he would stop and stare at for long moments. Snowmobiling was his hobby and he became a groomer for the Barretown Thunder Chickens. He used to chuckle because one of their first dinner dates was a packaged cold meal sitting in the groomer under a full moon. Kevin enjoyed making the white highways the best he could for all to enjoy the next day. He would joke he had the best winch assistant, Pam. A Mass of Christian Burial to Honor and celebrate Kevins life will be held on Monday,January 24th, 2022 at St. Monica's church at 11am. Following the Mass, a celebration of life will be held at The Roadhouse in Williamstown, Vermont. In lieu of flowers, donations can be made to the Grand Isle fish Hatchery in care of Charlie Drury at 14 Bell Hill Road, Grand Isle Vt. 05458. Arrangements are in the care of the Pruneau-Polli Funeral Home, 58 Summer Street in Barre.

Barre Town-Kevin John Collins, 56 of Barre suddenly took his journey to heaven on January 14th, 2022. Born on December 18th, 1965 to John and Lucille Collins at the Barre City hospital. Kevin lived in Barre most of his life and spent some time... View Obituary & Service Information

The family of Kevin J. Collins created this Life Tributes page to make it easy to share your memories.

Send flowers to the Collins family.