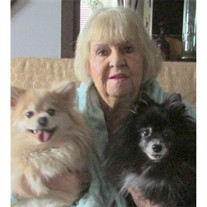 Lillian (Terri) Green Barre Town - Terri Green, of Taplin road in Barre, passed away in her daughters loving arms, on Oct. 8, 2020 at her home surrounded by her family. Terri was the daughter of Frank and Elizabeth Gonyeau, born in Glenn Sutton, Quebec. Soon after Terri was born, her parents returned to live in Montpelier, Vermont. Terri attended Union Elementary school and Montpelier high school. Terri married Delbert Green in St Augustine's Catholic Church in Montpelier, Vermont in December of 1958. Soon after their marriage, Terri and Del started trying to have a baby. After many years without success, Terri and Del bought a beagle. His name was Ginger, also known as" baby din". Then surprise! Terri was pregnant with their daughter Nicole. Terri and Del later divorced in 1975. Terri and her daughter Nicole were extra ordinarily close. Nicole was all Terri had in this world. Nicole's childhood years were spent solely with Terri. Terri and Nicole shared their holidays alone, just the two of them, as well as every other day . Terri and Nicole figured life out together. They were not only mother and daughter; they were best friends and each other's confidants. Throughout life Terri had her struggles but with Nicole by her side and watching out for her, they made it through life together. Terri had great love for her grandchildren Heather and Ryan. She loved seeing them and spending time with them. When Heather and Ryan were babies, Terri would spend hours rocking them in this old squeaky rocking chair and singing to them. I don't know who liked it more Heather and Ryan or Terri. Terri was a kind gentle soul. She was loved by everyone who met her. She never spoke an unkind word to or about anyone. She always looked for the good in everyone and loved animals of all kinds. She would scoop up bugs in the house and gently put them outside. She had many dogs and cats over the years that brought her great joy and comfort. Terri had two little Pomeranians (Panda and Cody) for the past twelve years. They brought her great joy and companionship. Panda and Cody are just lost without their momma. Terri moved in with Nicole and Nicole's family about five years ago to help out with the children and her step-granddaughter Tiffany. Terri and Tiffany were roommates and they both grew quite fond of each other over the years. Terri is survived by her daughter, Nicole Ballard and husband Duffy Ballard of Barre. Her grandchildren that she adored, Heather Conley, Ryan Sayers and her step granddaughter Tiffany Ballard, her two sisters Millicent Sequin of Montpelier and Elizabeth Sibley of Connecticut. Terri was predeceased by her parents Frank and Elizabeth Gonyeau, Nicole's father, Delbert Green, Her brothers, Henry Fleurry, Merritt Fleurry, and Sisters Doris Westover and Marion Westcom.               . Terri's wishes were to be cremated and kept in Nicole's living room on the end table by Nicole's chair. Here, she would still be with Nicole and Nicole could still talk to her every day. That is exactly where she is. Having Terri's ashes at home also brings Nicole great comfort. Terri also wished when her two little Pomeranians pass, they will be put with her. The family would like to thank Michelle Blake and Bonnie Breer of Central Vermont Hospice for their wonderful kindness and help in Terri's final days. There will be no services In lieu of flowers please make a donation to your favorite animal rescue. Arrangments are in the care of the Pruneau-Polii Funeral Home, 58 Summer Street in Barre.

Lillian (Terri) Green Barre Town - Terri Green, of Taplin road in Barre, passed away in her daughters loving arms, on Oct. 8, 2020 at her home surrounded by her family. Terri was the daughter of Frank and Elizabeth Gonyeau, born in Glenn Sutton,... View Obituary & Service Information

The family of Lillian Terri Green created this Life Tributes page to make it easy to share your memories.

Send flowers to the Green family.