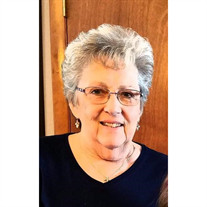 BARRE TOWN-Linda Marie Dindo-St.John, a lifetime resident of Barre, Vt - passed this life into eternal life unexpectedly on April 14th, 2021. Linda was born to Howard and Pauline Dindo on April 16th, 1946.  She was the oldest of 4 brothers and 3 sisters. She was employed at Grand Union Grocery for 35 years. She was an active member in her community, including being a member of St. Monica, the VFW Auxiliary Post #790, the Canadian Club in Barre, VT, and the American Legion Post #10. She took great pride in raising her 3 children.  On August 29th, 1992 she married Ron St. John and resided with him in Barre.   She is predeceased by her parents, and her sister- Judy Fleurrey.  She is survived by her Daughters, Deborah (and Bill) Swartz - Darcy Parker - and Rodney (Oggie) Foster, her husband Ron St. John, her siblings, Nancy (and Gene) Slade- Howie Dindo - Buddy (and Cathy) Fleurrey - Carol (and Steve) Merchant, Mark Dindo and Matt Dindo.  9 step children, 13 Grandchildren, and 12 Great grandchildren. She also shared her home with two special friends, Tamara Davis and Marie Picard. Linda was most known for her hugs, and her love for everyone she met.  From the minute you met her, she made you feel that you were important, and she genuinely loved you. She also had a love for flowers and gardening (Roses were her favorite) Camping, Cardinals, Shopping and Casinos A Mass of Christian burial will be held at St. Monica Church on Summer Street in Barre Monday April 19th at 11 am, followed by a celebration of life at the VFW - 527 East Barre Road, Barre, VT. It is requested that flowers be sent to St. Monica, donations to the VFW Post 790.  A family service will be held at the Berlin Corners Cemetery at a later date. She will be sharing her plot with her companion (dog) Harley - who predeceased her. There will be no calling hours. Arrangements are in the care of the Pruneau-Polli Funeral Home, 58 Summer Street in Barre. Those wishing to send online condolences may do so at: www.pruneaupollifuneralhome.com

BARRE TOWN-Linda Marie Dindo-St.John, a lifetime resident of Barre, Vt - passed this life into eternal life unexpectedly on April 14th, 2021. Linda was born to Howard and Pauline Dindo on April 16th, 1946.  She was the oldest of 4 brothers... View Obituary & Service Information

The family of Linda Marie Dindo-St. John created this Life Tributes page to make it easy to share your memories.