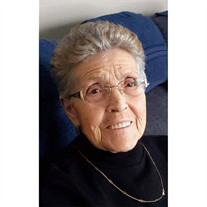 Madeleine Rose (Arguin) Perreault BARRE-Madeleine Rose (Arguin) Perreault, 87, of Barre, Vermont passed away after a brief illness on February 14th, 2020 with her family by her side.  She was born in Courcelles, Quebec, Canada to Laureat and Lucia (Pouliot) Arguin. She immigrated to the United States in 1959 with her husband and 4 children. She was a seamstress and homemaker. She worked at Harvard's and Homer Fitts.  She was a lifelong member of the Ladies of Saint Ann. She enjoyed being with her family and friends and knitting newborn hats for babies and adult cancer patients. She is survived by her beloved husband of 66 years, Gerard E. Perreault, and daughters Sylvia (Michael) Davis, Lynn (David) Guy, Diane and Nicole Perreault, and grandchildren, Justin Davis, Andrea (John) Rielly, Christopher Guy, Christopher (Angela) Schubring, Katie Schubring, and great-grandchildren, William Brusa and Beckett Rielly. She also leaves her sisters Lucille Rouillard and Marguerite Rousseau, brothers Simeon, Gregoire, Gerardin, Amedee and Jocelyn and many nieces and nephews and her beloved dog, Daisy.  She is predeceased by her parents, brother Clement Arguin, sister Clemence Rouillard and granddaughter Jennifer Guy Brusa. Services will be held May 9th, 2020 at 11:00 am at St. Monica Church in Barre.  Burial will follow at Hope Cemetery. There are no calling hours. In lieu of flowers, donations may be made in Madeleine's memory to the Palliative Care Program at CVMC or the local chapter of the American Cancer Society. Arrangements are in the care of Pruneau-Polli Funeral Home, 58 Summer St, Barre, Vermont 05641.

The family of Madeleine R. Perreault created this Life Tributes page to make it easy to share your memories.

Send flowers to the Perreault family.