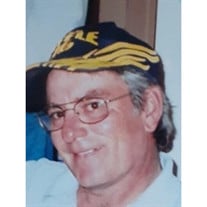 Barre City: Mario J. Leclerc 59, passed away Saturday, July 31, 2021, at home with his family. He courageously fought a 6 ½ year battle with cancer. Born in Barre, VT on May 8, 1962, he was the son of the late Normand and Jeannine Leclerc. Mario was in the Army and National Guard. Mario worked in granite most of his life. He was employed at Buttura & Gherardi when he retired due to health reasons in 2019. Mario enjoyed many sports throughout his life. He was a member of the Elks and loved golfing with his friends. He enjoyed watching the old cowboy shows with his grandchildren. He was always there to lend a helping hand to anyone that needed it. He often went out of his way to make his family happy. He was a terrific husband, father, grandfather, brother, and son. He loved spending time with his family. Survivors include his wife, Lorrie; his brother John Leclerc of East Montpelier; Mario's two children Jonathan Politis and his fiancé Danielle of Montpelier; Tiffany Leclerc and her fiancé Justin of St Johnsbury; also, by his eight grandchildren Reilly, Isabella, Aiden, Katie, Lizzy, Caliana, Sylvanas, and Mason. Mario had many Aunts, Uncles, and cousins in the United States as well as in Canada. There will be a graveside service on Saturday,  August 14, 2021 at 11:00 a.m. at the Maplewood Cemetery in Barre Town. There will be a celebration of Mario's life following the service at the Canadian Club. In lieu of flowers, contributions in Mario's memory may be made to the Central Vermont Home Health and Hospice (CVHH&H), 600 Granger Road, Barre, Vermont 05641. The family wishes to extend a heartfelt thank-you to his medical team at the Central Vermont Oncology Department for the excellent care Mario received and to Central Vermont Home Health and Hospice for their terrific support and care. Arrangements are in the care of the Pruneau-Polli Funeral Home, 58 Summer Street in Barre.

Barre City: Mario J. Leclerc 59, passed away Saturday, July 31, 2021, at home with his family. He courageously fought a 6 ½ year battle with cancer. Born in Barre, VT on May 8, 1962, he was the son of the late Normand and Jeannine Leclerc. Mario... View Obituary & Service Information

The family of Mario J. Leclerc created this Life Tributes page to make it easy to share your memories.

Send flowers to the Leclerc family.