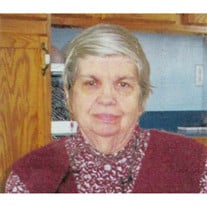 BARRE- Marybeth Hebert was called by the Lord on February 5, 2020 following a brief battle with cancer. Marybeth leaves behind her brother Kevin and his wife Rosemary of Milton, her sisters Martha Jo of South Burlington, and Ann of Colchester, as well as her lifelong friend Patricia Semanski of Barre. She was previously deceased by her parents Joseph and Margaret (Hance) and a younger brother and her godson John Thomas. Marybeth was born on March 6, 1948. She was raised in Burlington and attended Mount Saint Mary's Academy. After graduation she joined the Daughters of the Holy Ghost religious order. She left before taking her final vows, and returned to Vermont. Marybeth worked for many years at National Life Insurance serving as a supervisor. She served as a Girl Scout leader for many years. After leaving National Life she became the Director of Religious Education for St. Monica Church in Barre. Several years later she served as the Director of Religious Education for Saint Joseph's Cathedral in Burlington. Marybeth also served as a Lector, Minister of the Eucharist and served the spiritual needs of the ill and convalescing by delivering communion or offering prayers and a sympathetic ear. All who met her witnessed her deep faith and willingness to place others needs first. She believed that "The Lord is first, my family and friends are second, and I am third". Marybeth was never happier then when she was among her family and friends. This was especially true when she was with her nephews Kyle and Joel, their wives Erin and Jessie and her grandniece and nephews- Carizma, Brayden, and Milo. Marybeth touched the lives of many and will be dearly missed by those who knew her. Marybeth's family and friends thank the doctors and nurses of the Palliative Care Unit at the Central Vermont Medical Center for their wonderful care and compassion during this time. Calling hours will be from 5:30-8:00 PM on Monday February 10th in the Pruneau-Polli Funeral Home at 58 Summer Street in Barre. A mass of Christian burial will be held at St. Monica Church at 11:00 AM on February 11th. The Committal will be held in the spring. The Arrangements are in the care of the Pruneau-Polli Funeral Home, 58 Summer Street in Barre.

BARRE- Marybeth Hebert was called by the Lord on February 5, 2020 following a brief battle with cancer. Marybeth leaves behind her brother Kevin and his wife Rosemary of Milton, her sisters Martha Jo of South Burlington, and Ann of Colchester,... View Obituary & Service Information

The family of Mary Beth Hebert created this Life Tributes page to make it easy to share your memories.

BARRE- Marybeth Hebert was called by the Lord on February 5,...

Send flowers to the Hebert family.