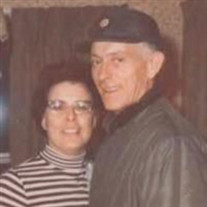 WILLIAMSTOWN-Maxine Lemery Davis passed away Wednesday, February 23, 2022. She was born September 7, 1925, in Braintree, VT. She was the 8th child of 12 children born to Ben & Ada (Bell) Lemery and the last surviving of her siblings. The stories she told about growing up in rural Vermont during the Depression were amazing. From her mother (all of 4’10”) standing over a wood cook stove in July, making bread and pies every day to catching brookies with her best friend and cooking them in the woods next to the stream where they were caught. Her Father sidelined as a bootlegger, and she had the great adventure of going to NYC to work in a “bicycle shop”. It must have been something for a 16-year-old Vermont girl in the 30’s to experience Radio City Music Hall and Delmonico’s. She met Dad at a barn dance in East Granville. He was playing guitar in the band. They were married January 1, 1944. She grew huge vegetable and flower gardens, and Joe always built a pantry in the cellars of the many houses we lived in for all the canning she did. Mom and Dad traveled to Alaska in 1954 in a Chevrolet with an old canvas army tent, two young kids and a cocker spaniel. She and Gerald (Joe) were married for 56 years. He passed in 1996. She worked for Ethan Allen furniture and Van Rault manufacturing, but she was happiest working for Bealy and Jim Howard at the original market in South Barre. She later worked for Pleezing Market in Williamstown, South Barre Mini Mart and the Pump & Pantry. She was strong and determined her whole life. If she didn’t feel well or had an ache or pain, she “just got busy” and forgot about it. She was predeceased by her husband Gerald (Joe), her son “Young” Gerald (Jerry), her daughter Marylou and grandson Chip. She is survived by her daughter Sheri Englert and husband Marke, 10 Grandchildren, 17 Great Grandchildren and 9 Great Great Grandchildren. She'll be laid to rest next to Joe in the West Hill Cemetery in Williamstown in a private service in the spring. Arrangements are in the care of the Pruneau-Polli Funeral Home, 58 Summer St. in Barre.

WILLIAMSTOWN-Maxine Lemery Davis passed away Wednesday, February 23, 2022. She was born September 7, 1925, in Braintree, VT. She was the 8th child of 12 children born to Ben & Ada (Bell) Lemery and the last surviving of her siblings. The stories... View Obituary & Service Information

The family of Maxine M. Davis created this Life Tributes page to make it easy to share your memories.