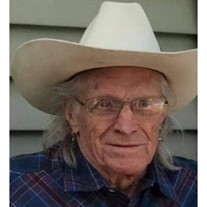 BARRE CITY- Merrill W. Carpenter,83, of Barre, passed away on Saturday, September 12, 2020 with his wife Kaye by his side. Merrill was born on December 29, 1936 in Denver Colorado. He was the son of the late Merrill and Rosemary (Whitney) Carpenter. Merrill met the "Love of His Life", Kaye, while horseback riding. They married in 1957. His first job was as a tailor's apprentice. He also worked at Ainsworth, a balance factory in Colorado, Omark Industries, a chainsaw factory when he moved the family to Oregon, and a groundsman at Chestnut Benevolent Association when they moved to Massachusetts. They then moved the family to Vermont. They ran their own trash pickup company and Merrill really wanted to learn to do woodworking. He loved it and was good at it. As their children started their own lives, they moved to Wisconsin where they worked at Cedar Ridge Residential Home for Christian Scientists.  Then he and Kaye moved to NY, where they worked at High Ridge House, a Residential Home for Christian Scientists.   In 2004, they returned to Vermont. There, they became part owners of the Knoll Motel for a few years with their daughter and son-in-law. He then fully retired. Merrill's love of music led him to learn how to play the guitar, organ and piano. Merrill, and his sister Sylvia performed Adagio dances in a variety troupe. Merrill has performed in plays and has done Western style singing. He was a serious Christian Scientist and enjoyed serving and singing hymns at his church. Merrill is survived by his Wife, Kaye A. Carpenter and daughter Kelly S. Sabens and her husband Stanley W. Sabens ll; granddaughter Tonya D. Silva and her husband Mike Silva; granddaughter, Marissa (Mari Angel) Carpenter, great granddaughter Kiki M. Reno and her husband Taylor Reno and great grandson, Tyler B. Young. Merrill is predeceased by his son Merrill R. Carpenter and his wife Marsha Carpenter. Also, by his grandson, Merrill Glenn Carpenter. At the family's request, there will be no calling hours or services. Arrangements are in the care of the Pruneau-Polli Funeral Home, 58 Summer Street, Barre Vermont.

BARRE CITY- Merrill W. Carpenter,83, of Barre, passed away on Saturday, September 12, 2020 with his wife Kaye by his side. Merrill was born on December 29, 1936 in Denver Colorado. He was the son of the late Merrill and Rosemary (Whitney) Carpenter. Merrill... View Obituary & Service Information

The family of Merrill W. Carpenter created this Life Tributes page to make it easy to share your memories.

BARRE CITY- Merrill W. Carpenter,83, of Barre, passed away on...

Send flowers to the Carpenter family.