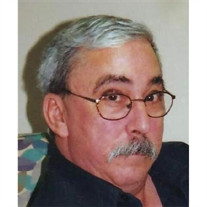 Michael Anthony Perreault age 65, of Cabot, Vermont passed away on Sunday, May 23, 2021 at the Central Vermont Medical Center in Berlin, Vermont. He was one of a kind, the true meaning of fun, love, and laughter. Born November 17, 1955 at Barre City Hospital, he was the son of Gerard (Joe) Perreault and Doris (Provost) Perreault. He attended elementary school and high school in Williamstown, Vermont graduating in 1973.  In 1974 he enlisted in the U.S. Army and was honorably discharged on July 9, 1980. He married Sandra (Couture) Perreault in 1977 and lived in Graniteville, Vermont for many years where he raised his family. They later divorced. Michael worked for Culture Craft Sandblast for many years in Barre, Vermont and retired in 2010. In his spare time he enjoyed fishing, and was a member of the North Country Bass Masters. He also enjoyed hunting, gardening, the TV show The Big Bang Theory, the weekly poker games he had with friends, and the NY Yankees. He loved going to Karaoke on Friday nights, and was a big fan of Elvis Presley. Michael loved having cookouts and wearing Hawaiian shirts. He enjoyed being with family and friends, but most of all spending time with his grandchildren. Survivors include his loving partner, and best friend Denise Lamberton, his daughter Stephanie Jacobs, son-in-law Michael Jacobs and their children Mallory, Gavin, Nolan, Mason, and Emmitt. His daughter Nicole Perreault, her son Cameron and daughter Lovey. His siblings Sherri Lamberton and husband Michael of Williamstown, Vermont and Gerard Perreault and significant other Diane Emery of Orange, Vermont. He is also survived by his Goddaughter Marie Leibold and many nieces and nephews. In addition to his parents and grandparents Michael was predeceased by his son Scott Perreault. The graveside service to honor and celebrate Michael's life will be held on Saturday June 5, 2021 at 1:00 P.M. at St. Sylvester's Cemetery, 22 Websterville Road, Barre, Vermont followed by a Celebration of Life held at the Canadian Club in Barre Vermont. In lieu of flowers, memorial contributions may be made to Central Vermont Home Health and Hospice, 600 Granger Road Barre, Vermont 05641. Arrangements are in the care of Pruneau-Polli Funeral Home, 58 Summer Street in Barre Those wishing to send online condolences may do so at: www.pruneaupollifuneralhome.com

Michael Anthony Perreault age 65, of Cabot, Vermont passed away on Sunday, May 23, 2021 at the Central Vermont Medical Center in Berlin, Vermont. He was one of a kind, the true meaning of fun, love, and laughter. Born November 17, 1955 at... View Obituary & Service Information

The family of Michael Anthony Perreault created this Life Tributes page to make it easy to share your memories.

Send flowers to the Perreault family.