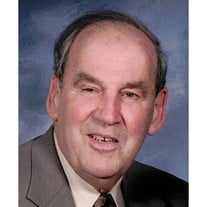 PAUL J. CARBONNEAU BARRE- Paul J. Carbonneau, 87, of Summer Street in Barre, passed away on Sunday November 21, 2021, at the Central Vermont Medical Center in Berlin. Born in Barre on February 27, 1934, he was the son of Arthur and Louise (Bouchard) Carbonneau. On July 19, 1952, he married Cecile St. Jean in the St. Sylvesters Church in Graniteville. They have always made their home in Barre. Paul and Cecile loved camping at Rea Janet Cabins in Malletts Bay in the Summer and trips to Hawaii in the Winter. Also Las Vegas. He was a member of St. Monica's Catholic Church in Barre where he and his wife were ushers. Paul was also on the Parish Council for Msgr. Fitzsimons, Msgr. Reid E. Mayo, and Rev. Bernard H. Messier. Paul attended St. Monica School and Spaulding High School. In 1946, Paul started his employment at the Pruneau-Polli Funeral Home in Barre as a funeral director. He spent his entire career at the Pruneau-Polli Funeral. Paul worked right up until the day of his passing. Paul and his loving wife spent their lives helping families with the passing of their loved ones. This was 24 hour/ 365 days a year commitment which they proudly served. Cecile would like to thank the community for their kind words and support for Paul. Paul was very proud of being a third and fourth degree in the Knights of Columbus. He also was a member of the National Funeral Directors Association, the United Workers Credit Union, Washington County Notary, and Corporator at the Northfield Savings Bank in Barre He was a proud member of the Mutuo, Barre Elks, and Canadian Club. Paul is survived by his wife of 68 years Cecile (St. Jean) Carbonneau of Barre, also his son Roger Carbonneau of Port Orange Florida. Besides his Parents, Paul was predeceased by his 10 Siblings: Annette Gingras, Dorothy Gosselin, Alice Antonitis, Yvonne Smitty, his twin sister Pauline Bolio, Jeannine Lefebvre, Jean McGlynn, Arthur Carbonneau Jr., Roger Carbonneau, and Lucien Carbonneau. There will be no calling hours. A Mass of Christian Burial to honor and celebrate his life will be held on Friday, November 26, 2021, at 11am at St Monica's Catholic Church in Barre. Contributions can be made to the Vt. Humane Society, P.O. Box 687 Montpelier Vt. 05601 and to the St. Monica's Catholic Church, 79 Summer Street in Barre. Cecile would personally like to thank the staff in the Palliative Care Unit at the Central Vermont Medical Center for their wonderful care and compassion they showed to Paul. She will be forever grateful. Their names are Sabra Snelling, Kasey Ashford, Stephanie Vreeland, Alexandrea Holland Judy Huntington, Jordon Preman, Kelly Talbert and all others who helped with Paul's care. Arrangements are in the care of the Pruneau-Polli Funeral Home, 58 Summer Street in Barre. The Funeral Home that Paul spent his life to build. The family request that people attending Paul's service be masked. Thank you.

PAUL J. CARBONNEAU BARRE- Paul J. Carbonneau, 87, of Summer Street in Barre, passed away on Sunday November 21, 2021, at the Central Vermont Medical Center in Berlin. Born in Barre on February 27, 1934, he was the son of Arthur and Louise (Bouchard)... View Obituary & Service Information

The family of Paul J. Carbonneau created this Life Tributes page to make it easy to share your memories.

Send flowers to the Carbonneau family.