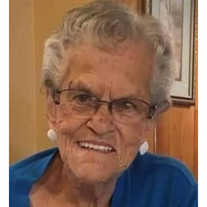 Barre - Pauline N. Otis, 89, of Barre, passed away on Wednesday, August 25, 2021 in Peabody Mass.  Pauline was born in Nashua N.H. on December 25, 1931 to the late Victor and Clarilda (Laperle) Jalbert. Pauline married the love of her life, Robert Otis on August 20, 1955. They were married at and became members of Mother Cabrini Church in East Barre.   They would make their home on Jalbert Road in Barre Town for many years before eventually living at Lone Pine Campground in Colchester in the summer and Zephyrhills Florida in the winter. After Pauline's schooling, she went to work for the Capacitor Plant in Barre. She would then work for many years as a cook at the Barre Town School and also cooked for Rowan Court Nursing Home until her retirement. Our precious Pauline loved to color and dance, but her biggest passion in her life was spending time with her loving family. She will be missed. Pauline is survived by her sons; Raymond Otis and his wife Lorri of NH, Richard Otis and his companion Susan Barnett of Florida, Norman Otis and his wife Virginia of PA. She is also survived by her daughter Joanne Stevenson of PA.; Her grandchildren; Kevin Otis, Heather Smalley, Lindsay Otis, Brooke Otis, Ashlynn Barnett, Charisse Stevenson, Kristin Heckman, Amber Otis, Ashley Gladfelter and Gregg Padamonsky. She is survived by several great grandchildren and many nieces and nephews. Pauline was predeceased by her husband Robert Otis. Her brothers; Roger Jalbert, and Norman Jalbert, and her sister Jacqueline Otis. Her children Paul Otis and daughter Sandra Otis. A Graveside Service to honor and celebrate the life of Pauline will be held on Saturday, September 18, 2021 at St. Sylvester's Cemetery in Lower Websterville VT at 11:00 AM. Contributions in Pauline's memory can be made to the Central Vermont Home Health and Hospice at 600 Granger Road in Berlin VT 05641. There are no calling hours. Arrangements are in the care of the Pruneau-Polli Funeral Home , 58 Summer Street in Barre VT.

Barre - Pauline N. Otis, 89, of Barre, passed away on Wednesday, August 25, 2021 in Peabody Mass.  Pauline was born in Nashua N.H. on December 25, 1931 to the late Victor and Clarilda (Laperle) Jalbert. Pauline married the love of her life,... View Obituary & Service Information

The family of Pauline M. Otis created this Life Tributes page to make it easy to share your memories.

Send flowers to the Otis family.