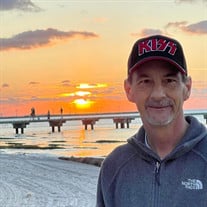 BARRE - Friday June 10th, 2022, Peter Michael Sinclair (Cid) lost his battle with Pancreatic Cancer at the age of 56. Pete was born February 24th, 1966, in Rutland, Vermont to Carol S. Hanson and Michael C. Sinclair. He spent most of his years growing up and settling in Barre, Vermont attending Barre Schools and graduating from Spaulding High School in 1984. You may recognize him from bands like Block Tower, Round Trip, Safari, First Strike, Misspent Youth, & Imagine That; Pete has dedicated more than 40 years on the local New England band circuit featuring as a guitarist, a bassist, and if you really got him rocking, a backup vocalist. In between his many musical accomplishments, he also founded the Vermont Multimedia Group and served the arts communities for the last couple decades. Outside of the music scene, some know him from the several years he worked for 802 Toyota serving Central Vermont with the utmost care and customer service. No matter where your paths crossed, you knew you always had a friend in Pete. In 2000 Pete met the love of his life and best friend Brenda - they had dinner together and he never left. They married in 2008 and settled in Vermont with their collective army of children. If there is anything you need to know about Pete, you should know how witty, charming, intelligent, goofy, & how willing he was to get in a political tussle... or any verbal tussle; and above all he was a heavily devoted family man. He also loved to garden, maintain his home, catch a concert, travel, and immerse himself into the NFL football season. Peter leaves behind a large legacy, he always believed that family is more than blood relation and if you were so lucky to know this love, you felt it to your core. He is survived by his wife Brenda Otero of Vermont, his daughters: Mariah (Ben) Sinclair Luther of Wisconsin, Rebecca (Kevin) Sinclair Stark, Gabriel Sinclair, Morgan Sinclair, all of Vermont; A Son: Mark Kittell of Vermont; Stepchildren: Stephen Hudson of Wisconsin, Jasmine White of Vermont, and their spouses. Grandchildren: Elijah, Alaric, Lincoln, Lydia, & Reid; the lights of their Grampy’s life. Also survived by his stepfather Malcolm Sandison of Vermont, Stepmother Deborah Sinclair of Arizona, Stepsisters Kelly and Jaime, In-laws, and many beloved nieces and nephews. He is predeceased by his mother and father, and his brother Brian S Sinclair. A private calling hour will be held Friday June 17th and Celebration of Life for all to follow, Sunday the 19th at Gusto’s in Barre from 2pm to 8pm. Arrangements are in the care of the Pruneau-Polli Funeral Home, 58 Summer Street in Barre.

The family of Peter Michael Sinclair created this Life Tributes page to make it easy to share your memories.

Send flowers to the Sinclair family.