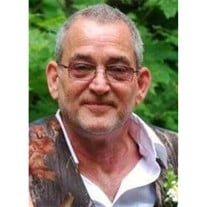 WILLIAMSTOWN- Richard "Ricky" Paul Canas, 59 of Williamstown, VT, passed peacefully on October 16, 2021, at his home. Born on November 27, 1961, in Barre, VT; Ricky was the youngest son of Alexander and the late Evelyn (Machia) Canas. Ricky grew up in Barre, and the family later moved to Williamstown. He graduated from Spaulding High School in 1980. He married Melanie Cassani in 1980 and together they had one daughter, Stacey.  He later married and divorced Lori Turner. In July, 1980, Ricky joined the Army to "learn a trade."  One of his assignments was as a tracked-vehicle mechanic that crewed eight-inch howitzers, the most accurate of the artillery's weapons. When he returned from the service, he started his career as an electrician with Cassani Electric. He was later employed by the State of Vermont, Department of Corrections, for about ten years.  He enjoyed a close working relationship with many of the directors and commissioners of the Department. Ricky had a heart of gold.  He had kind words of encouragement for all, and wanted everyone around him to enjoy life! He loved his Harley, four-wheeler - anything outdoors. Hunting was a passion of his - every single year!! Rick is survived by his daughter, Stacey Canas, of Gorham, Maine; father Alexander of Williamstown; brothers James (Candy Potrzeba) and Jeffrey (and wife Bernie), both of Williamstown; his long-time companion, Marla Hood; and many aunts, uncles and cousins. He was predeceased by his mother, Evelyn, whom he cared for during the last months of her life. A Mass of Christian Burial to celebrate the life of Ricky will be held at St. Monica's Church on Saturday, October 23, at 11:00 am, followed by a burial at Hope Cemetery, with Military Honors. In lieu of flowers, Rick would be honored if donations were made to the Disabled American Veterans Association. Arrangements are in the care of the Pruneau-Polli Funeral Home, 58 Summer Street, Barre, VT.

The family of Richard Paul Canas created this Life Tributes page to make it easy to share your memories.

Send flowers to the Canas family.