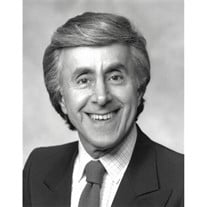 RICHARD M. SHADROUI BARRE- On June 19, 2021, Richard "Dick" M. Shadroui, at the age of 97, passed on peacefully at the Woodridge Nursing Home in Berlin. He had resided in Barre for almost 40 years. He was born on June 3, 1924 in his family... View Obituary & Service Information

The family of Richard M. Shadroui created this Life Tributes page to make it easy to share your memories.

Send flowers to the Shadroui family.