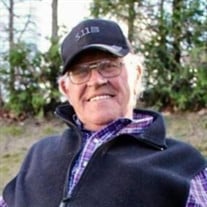 BARRE-Dick began his journey to eternal life just before dawn on Monday May 9, 2022. His wife and his three daughters nursed and cared for him throughout that night, and his beloved dog (and constant companion) Sadie, was at his side at the very end of his earthly life. Dick was the only child of Harold and Margaret (Whittig) Shaw of Schuylerville, New York. Dick was born in Cambridge, NY on July 30, 1936. He attended St. Clement’s Grammar School, and was a 1954 graduate of St. Peter’s Academy in Saratoga Springs, New York. Following high school, Dick began his higher education at Mater Christi Minor Seminary in Albany, New York. Following successful completion there he was deemed eligible to pursue the priesthood at Our Lady of the Angels Seminary at Niagara University in Buffalo, New York, all under the auspices of the Diocese of Albany, New York. Dick was ordained to the Roman Catholic priesthood in May of 1962. He faithfully served the people of that diocese at several parishes in the Albany area until June of 1966. On August 13, 1966 he married Joyce (Gilmour) Shaw in Commack, New York, and so began another whole chapter of what can only be described as a long, and remarkably diverse life. Dick and Joyce moved to Montpelier, Vermont that very same day, and so began the happiest and most gratifying journey of his life; fathering three children, creating a whole new world for his family in Vermont, engaging in the things he loved most, sharing his wit, wisdom and talents, participating in his daughters’ activities, and always welcoming each new adventure with his whole heart. Dick loved to fish & hunt, and embraced any outdoor endeavor with vigor. In his younger days he liked cross country skiing, ice skating, snowmobiling, and camping. He loved to garden, and a week before his passing he was supervising the planting of flowers from his deck. He loved a good book, old movies, police shows, playing his harmonica, feeding the birds, offering free advice to anyone who would listen, collecting strange memorabilia, and watching the world go by from his front lawn chair. And above all, he loved a grilled hot dog (or 2) or a Burger King Whopper with cheese. Early on he was a dedicated Boy Scout leader, and eventually assisted his daughters’ Girl Scout troop with their outdoor adventures. He was also associated with several police organizations over the years. Dick’s working history included a variety of positions within the State of Vermont and he retired from the Corrections Department after 30 years of service to the State. In addition he did part time work with the Barre City Police Dept, the Washington County Sheriff’s Dept, and the Montpelier Police Department. He was proud to have been the first Community Service Officer for the City of Montpelier. Dick is predeceased by his parents, Harold & Margaret Shaw, and his eldest granddaughter, Emma Cassani. Dick is survived by his wife of more than 55 years, Joyce (Gilmour) Shaw; his three daughters and their spouses; Kristin (Shaw) and Todd Gaudette of Georgia VT, Cyndi (Shaw) and Domenic Cassani of Belgrade ME, and Emily (Shaw) and David Esce of Cicero, NY. In addition, he is survived by his six remarkable grandchildren: Tucker Shaw Gaudette, Jenna Cassani, Anna Esce, Shea Cassani, Adelyn Esce, and Jillian Esce, all of whom provided the wind beneath his wings in this life. In addition, he is survived by his nephew, (Paul) Kane Gilmour of Newport Center, VT. A Mass of Christian Burial will be celebrated at 11:00 AM on Monday, May 16, 2022 at St. Monica Church, 79 Summer Street. Burial to follow at Hope Cemetery. So if you’re thinking of Dick in the coming days and weeks, you can honor him by feeding some birds, planting a flower, taking a fishing pole to a riverbank, smiling at your neighbor, performing a random act of kindness, or hugging a loved one. The entire family would like to acknowledge the endless devotion and care provided by Hospice Nurse Cat Allen who, in addition to her nursing skills, was an enormous source of comfort and encouragement to us all. Couldn’t have done it without you Cat! If you care to, you can also make a contribution to St. Monica’s Food Shelf @ 79 Summer Street, Barre, Vt. or Central Vermont Home Health and Hospice, 600 Granger Rd. Barre, VT 05641, but in the end, all that matters is your love…and Love Never Fails. Arrangements are in the care of the Pruneau-Polli Funeral Home, 58 Summer Street in Barre

BARRE-Dick began his journey to eternal life just before dawn on Monday May 9, 2022. His wife and his three daughters nursed and cared for him throughout that night, and his beloved dog (and constant companion) Sadie, was at his side at the... View Obituary & Service Information

The family of Richard J. Shaw created this Life Tributes page to make it easy to share your memories.

BARRE-Dick began his journey to eternal life just before dawn...

Send flowers to the Shaw family.