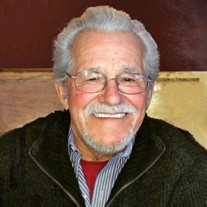 POCASSET MASS-Robert Paul Beaudoin passed on March 4, 2022 at age 86 after a lengthy struggle with declining health. Bob was born on June 2, 1935 to Angela (Archambault) Beaudoin and Aime Beaudoin, Jr. in Barre Town, VT. He served in the US Navy from 1953-56, stationed on the USS Hornet; during his service he established himself as the Officers’ Barber, despite having any experience. Following discharge, he used the GI Bill to get his pilots’ license and attend barber school, eventually owning and running Bob’s Modern Barbershop in Westwood, MA and was a medal-winning archer. In retirement, he moved to Pocasset MA where he was an avid gardener, and was frequently found bird watching at Barlows Landing Beach. Throughout his life, Bob was passionate about farming, caring for animals, and above all, loving his children. Whether you knew him as Bob, Bobby, “Bobby da Bahbah”, Garden Bob, Flower Bob, Dad, Daddy or Papa, people were drawn to his charm, his dazzling smile, and the infectious laugh that caused everyone in the room to join along – in Papa’s presence, people laughed until it hurt; we’ll all miss that laughter. If you asked him how he was doing, he always said: “I’m fine”. At long last, he’s truly fine. Bob is survived by his former spouse Joanne McKinnon, five children: Paul Beaudoin and his wife Tonja (Tice) of Bonners Ferry ID; Kathleen (Beaudoin) Glenn and her husband David Glenn of Denver, CO; Laurie (Beaudoin) Brickles and her husband Daniel Brickles of Griffithsville WV, Mark Beaudoin and his wife Laura (LaJeunesse) Beaudoin of Hudson MA, and Michelle (Beaudoin) Bergman and her husband Richard Bergman of Capitola CA; Bob also leaves behind 10 grandchildren, and 8 great-grandchildren. Bob was predeceased by his beloved sister and best friend Irene (Beaudoin) Pittsley in 1982 and her husband Richard Pittsley in 2017; he was also predeceased by his siblings Alcide Beaudoin, Claire Browning, Lucille Milne, Bernard Beaudoin, Annette Boyce, and Lorraine Newton, as well as many nieces and nephews. In lieu of sending flowers, Bob would have much preferred that you plant a flower instead – one that conjures a memory of him each time you look upon it. Alternately, you may send a donation to the Breast Cancer Research Foundation, In Memory Of Irene (Beaudoin) Pittsley; or if you are moved to do so, please donate blood to the American Red Cross, In Memory Of Robert Beaudoin. A graveside service will be held later in 2022 at St. Monica’s Cemetery in Barre, VT with arrangements by Pruneau-Polli Funeral Home.

POCASSET MASS-Robert Paul Beaudoin passed on March 4, 2022 at age 86 after a lengthy struggle with declining health. Bob was born on June 2, 1935 to Angela (Archambault) Beaudoin and Aime Beaudoin, Jr. in Barre Town, VT. He served in the US... View Obituary & Service Information

The family of Robert P. Beaudoin created this Life Tributes page to make it easy to share your memories.

Send flowers to the Beaudoin family.