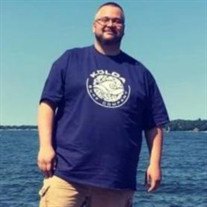 BARRE-Robert Charles Rugar, known to most as Bob and to his family as Bobby, 38 of Barre VT passed away on Saturday June 18, 2022. Bobby was born in Biddeford Maine on a cold, snowy day February 5, 1984. His attending nurse said he was the most beautiful baby she had ever seen, and his mother could not have agreed more. He attended elementary school in Woodsville NH, middle and high school in the St Johnsbury VT school system. At 16 he decided he wasn’t cut out for school and he entered the world of employment, becoming the one of the youngest manager of a KFC franchise. In 2005 Bobby’s best friend David Tucker drove across the country, packed Bobby into his car and they drove off to Kentucky where Bobby made a brand new life for himself. He met and married Candice Atwood, and became an instant father to her children. They built a beautiful life together, and eventually had a child of their own. Aubree Lisa was Bobby’s greatest love, and when his marriage ended and he returned to Vermont, his heart remained in Kentucky, held by his sweet little girl’s hands. Bobby was extremely proud of his time as a Correctional Officer at the Northpoint Training Center in Danville Kentucky where he worked from 2009-2015, reaching the rank of Sergeant. Upon his return to Vermont he decided to change career fields and began working in Mental Health. He was a Recovery Support Specialist at Pearce House in Williamstown and most recently a Direct Care Team Leader at Brookhaven Treatment and Learning Center in Chelsea. Bobby loved fishing, driving (anyone who has ridden with him can attest to the fact that it wasn’t one of his more refined skills), as a child he was a voracious reader. He loved music, Frank Sinatra being his favorite. And Bobby loved eating. He loved his mother’s cooking most of all. He liked trying new foods, and enjoyed dining out. He had a deep love for all of his families… biological, chosen and work. He was a large man, both in stature and in personality. You knew when he was in the room, mainly because he would be telling an off-color story barely appropriate for the situation, and everyone would be laughing. He is survived by his partner and best friend Robin Skiffington and her children Maria and Trevor, his daughter Aubree Lisa Rugar, his mother and stepfather Darla & Stephen Richardson, his brother Randy Rugar, his sister Allison Manning and wife, Jordan. Nieces Hannah Rugar, Sophie Rugar and nephew Jeremiah Fletcher, Stepsiblings Megan Price, Beckie Sue Richardson and Matthew Richardson. Also numerous aunts, uncles and cousins, too many to list. In lieu of flowers, the family is asking that you donate to a mental health organization of your choice in honor of Bobby. There will be a celebration of Bobby’s life on Saturday, June 25, 2022 from 1-5 PM at the VFW at 1 Pioneer St. in Montpelier. Arrangements are in the care of the Pruneau-Polli Funeral Home, 58 Summer Street in Barre Vermont.

BARRE-Robert Charles Rugar, known to most as Bob and to his family as Bobby, 38 of Barre VT passed away on Saturday June 18, 2022. Bobby was born in Biddeford Maine on a cold, snowy day February 5, 1984. His attending nurse said he was the... View Obituary & Service Information

The family of Robert C. Rugar created this Life Tributes page to make it easy to share your memories.

BARRE-Robert Charles Rugar, known to most as Bob and to his family...

Send flowers to the Rugar family.