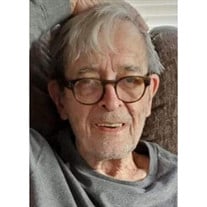 SOUTH BARRE-Roger Joseph LeClair, 85, of South Barre, passed away peacefully October 23rd 2021, after a five year battle with Alzheimers. Born in Barre, Vermont on April 25th 1936, he was one of six children born to Napoleon LeClair and Julia (Barnes) LeClair. Roger attended school in the city of Barre. After schooling he joined the US Navy for four years where he received a medal of Good Conduct. In February, 1962, Roger married Barbara (Alexander) and they raised seven children in their home on Beckley Hill and later on, Richardson Road in Barre. Throughout Roger's life he worked passionately as a Projectionist for the Paramount Theaters 1952-1955, was a member of the Navy from 1955-1959, working for Montgomery Ward from 1960-1975 and lastly he devoted the remainder of his working years 1975-2016 to Bond Auto Warehouse in Barre, retiring on the same day as the owners of the local business. Roger enjoyed Bowling at Twin City Lanes, Horseshoes at local clubs and most of all calling bingo and selling rip offs at all of the bingo halls in Barre until he was 83 years old. He was also a member of the Knights of Columbus for several decades, serving on many committees and honored as Knight of the Month multiple times. Survivors include the mother of his children Barbara LeClair of Barre and his children, Jodi, Terri, Kelli, Roger, Vicki, Jami and Brittany as well as many grandchildren and great grandchildren. He is also survived by his brother Michael LeClair and nieces and nephews. He was predeceased by his parents as well as two brothers and two sisters. A Mass of Christian Burial will be held on Saturday, October 30, 2021 at 11am at St. Monica's Church in Barre. Burial will follow to Wilson Cemetery in Lower Websterville VT. Calling hours will be held on Friday, October 29, 2021 from 7-9pm at the Pruneau-Polli Funeral Home, 58 Summer Street in Barre VT. There is extra parking across the street in St. Monica's parking lot. In lieu of flowers donations may be made to Meals on Wheels, made out to City Hotel Cafe, 30 Washington Street Suite 1 Barre Vermont 05641 in Memory of Roger LeClair.

SOUTH BARRE-Roger Joseph LeClair, 85, of South Barre, passed away peacefully October 23rd 2021, after a five year battle with Alzheimers. Born in Barre, Vermont on April 25th 1936, he was one of six children born to Napoleon LeClair and Julia... View Obituary & Service Information

The family of Roger J. LeClair created this Life Tributes page to make it easy to share your memories.

Send flowers to the LeClair family.