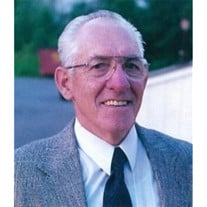 WILLIAMSTOWN - Romeo Antonio Isabelle, Sr., passed away peacefully on Monday, March 8, 2021 at his home surrounded by family. He was born on October 3, 1933 in South Barre, Vermont at his family home.  He was the son of Stanley and Marie Ange Isabelle. Romeo graduated from Spaulding High School in 1952.  He served in the U.S. Army, Private First Class, from 1954 to 1956 where he was stationed in Brooklyn, New York. He married Yvonne Marie Ducharme, the love of his life, on June 6, 1959. Romeo and Yvonne settled in Barre, Vermont where they raised their five children.  Romeo was an entrepreneur and carpenter by trade.  He built, renovated, and sold several houses in Barre, including his parent's farmhouse where he grew up. He also built his daughter and husband's house on Monhegan Island, Maine. He spent many hours in his woodworking shop where he built several pieces of furniture for his family and friends. Romeo loved spending time with his family and sharing stories about his life with them.  He was a kind, loving, devoted husband and father. He loved his home and took great pride in keeping a well-kept property. He had a wonderful sense of humor and was always quick with a joke. He enjoyed gardening, hunting, and spending time in the woods. He had a deep respect for the land and animals. He is survived by his loving wife Yvonne of Williamstown, VT, a daughter Danielle Isabelle-Berrien and her husband Clifford E. Berrien (Albuquerque, NM), a daughter Phyllis Jackson and her husband Gregory Jackson (Barre, VT), a daughter Sylvia Murdock and her husband Daniel Murdock (Port Clyde, ME), a daughter Renee Howe and her husband Kenneth Howe (North Pomfret, VT), and a son Romeo Isabelle, Jr. and his wife Tonya (Kennedy) Isabelle (Oak Hill, OH) and brother Hector Isabelle and his wife Marilyn of Barre. He is also survived by seven grandchildren Erica Jackson, Matthew Jackson and his wife Laurel (Sturner) Jackson, Amelia Murdock, Sarah and Lydia Howe, Romeo III and Aiden Isabelle. He was predeceased by his parents, three brothers (Edward, Leo, and Ellis), and two sisters Cecile Hull and Claire Carmel. A funeral service will be announced at a later date. Arrangements are in the care of the Pruneau-Polli Funeral Home, 58 Summer Street in Barre.

WILLIAMSTOWN - Romeo Antonio Isabelle, Sr., passed away peacefully on Monday, March 8, 2021 at his home surrounded by family. He was born on October 3, 1933 in South Barre, Vermont at his family home.  He was the son of Stanley and Marie Ange... View Obituary & Service Information

The family of Romeo A. Isabelle Sr. created this Life Tributes page to make it easy to share your memories.