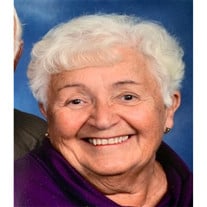 WILLIAMSTOWN- Sally Brousseau (Lajeunesse) Bilodeau, 82, passed away peacefully April 4, 2020 at her home, with her loving family by her side, after a courageous battle with cancer.  Sally was born on April 22, 1937 in West Stewartstown, NH.   She was the daughter of Helen (Lavertue) & Adelard Brousseau of Norton VT. Sally grew up on Big Averill Lake in Averill VT, until she was 10 yrs old.  She spent much of her time helping the Snare family, at their home on Big Averill Lake.  Sally and her family moved to Montpelier, VT in 1947.  Sally attended St. Michael's Elementary and High school, graduating in 1955.  She worked at the First National Bank, in Montpelier until 1959, when she met and married John Lajeunesse, and she moved to Barre, VT. Sally's full-time job was then raising her seven children. She had the utmost love and patience for her family, many people described her as a ¨saint¨, so soft spoken and angelic. In 1977, Sally began work at The Granite Savings Bank, starting as a teller, working her way around different departments, she was a perfect fit as a customer service representative, before she retired in 1995. Sally loved to talk with people and had a special way of helping with her calm voice and genuine kindness, always having a smile on her face. She also worked at Homer Fitts in Barre, still keeping in contact with the public was essential to her. In 1994, she met and married the love of her life, Henri Bilodeau. They were the happiest they had ever been, all their friends and family could see the special love they shared.  They resided in Barre Town and began traveling together to Florida in the winter, they then moved to Williamstown in 2014. Henri and Sally had celebrated their 25th wedding anniversary on Oct 1, 2019. Sally enjoyed knitting, reading, tending to her flower gardens, and lounging by the pool. Sally loved her trips to the ocean and was happiest when surrounded by family. Sally leaves behind her husband, Henri Bilodeau of Williamstown, VT; seven children, eleven grandchildren and eight great-grandchildren.  Lisa Maxon and her husband Robert of Fairfax, VT;  Gisele Walker and her husband Gary of Colchester, VT;  Joe Lajeunesse and his wife Lynn of Barre Town; Tony Lajeunesse of East Orange, VT and Soldotna, AK;  Dan Lajeunesse and his wife Loriann of Barre;  Jim Lajeunesse and his wife Tracie of Spokane, WA; Tammi Dudley and her husband Robert of Barre Town.  Grandchildren; Jean Laird of Richmond VT; Sterling Dickinson of Hinesburg, VT; Nathan Dickinson of CT; Maisie Lajeunesse of Barre Town; Bala Lajeunesse of TX; Muskan Lajeunesse of ME; Imran Lajeunesse of Barre; Megan Lajeunesse of Spokane, WA; Randi Dudley, Evan Dudley of Barre Town.   She had many nieces, nephews and cousins; her special nieces are Linda (Aja) Sands of Montpelier, VT; Mary (Aja) Jennings of Georgia, Her Brother-in-law, Fr. Leopold Bilodeau of Lowell, VT. Sally was predeceased by her parents Helen and Adelard Brousseau, her brothers Simon Brousseau and Fredrick Brousseau, her sister Florence (Brousseau) Aja.  Mother-in-law, Antoinette Dufresne; brothers-in-law, Romeo Bilodeau of Barre and Bernard Dufesne of AZ. A Catholic funeral will be held on June 20, 2020, 11:00 at St. Monica Church in Barre, VT. In Lieu of flowers, donations could be made to Central VT Home Health and Hospice, 600 Granger Road, Barre Vt. 05641 Arrangements are in the care of the Pruneau-Polli Funeral Home, 58 Summer St. Barre, Vt.

WILLIAMSTOWN- Sally Brousseau (Lajeunesse) Bilodeau, 82, passed away peacefully April 4, 2020 at her home, with her loving family by her side, after a courageous battle with cancer.  Sally was born on April 22, 1937 in West Stewartstown, NH.... View Obituary & Service Information

The family of Sally Bilodeau created this Life Tributes page to make it easy to share your memories.

Send flowers to the Bilodeau family.