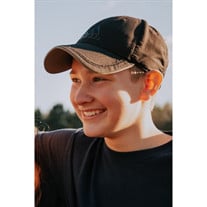 WILLIAMSTOWN-Steven M. Tracy II, 14, of Williamstown VT, passed away unexpectedly on Monday, May 18, 2020. Steven was born at CVMC on December 18, 2005 to Steven and Brandi (Rogers) Tracy. He attended Williamstown Elementary School and then Williamstown Middle High School. Steven worked with his Dad at their granite polishing company, T&T Custom Polishing, in Barre VT. Steven received his hunting license at 8 years old, his boating license at 12 years old, and was working on his ATV license at the time of his death. He won 11 trophies from tractor pulling, including 'Rookie of the Year', 'second place in total points', and 'most improved puller' during the 2019 pulling season. Steven enjoyed tractor pulling, fishing, ATV riding, duck hunting, kayaking, adventuring outdoors, being with friends, baking his 'famous brownies', playing video games, playing with his 4 dogs, working out, riding around on back roads, making others laugh with his inappropriate and outlandish jokes, polishing granite, and working on anything he could with his Dad, Uncle Dexter and brother-in-law. Steven had a beautiful heart and strove to make others happy at all times. He was energetic, selfless, fearless, empathetic, and mature for his age. He was the life of the room wherever he went and got joy from making other people laugh. Steven could do anything that he put his mind to and was excited to grow up and be out in the world. He had a goofy demeanor and the best sense of humor. In the words of his friend, Cody, anyone who met Steven could tell his worth. He will be deeply missed by all who love him. Steven is survived by his parents, Steve and Brandi Tracy of Williamstown, his older sister and confidant Kiley Tracy of Williamstown, his brother-in-law, Heydan Garbacik, his paternal grandmother, Shirley Hartson of Chelsea VT, his maternal grandparents, James and Helen Russell of Chelsea VT, many aunts, uncles, cousins, and his great grandparents. He also left behind his chocolate lab, Charlie, numerous friends at school including his best friends Jordan and Thomas, and all of his friends in the tractor pulling community. Donations can be made in Stevens's memory to the Orange County child advocacy center, 354 VT-110, Chelsea, VT 05038 There will be no calling hours. Arrangements are in the care of the Pruneau-Polli Funeral Home, 58 Summer Street, Barre VT.

WILLIAMSTOWN-Steven M. Tracy II, 14, of Williamstown VT, passed away unexpectedly on Monday, May 18, 2020. Steven was born at CVMC on December 18, 2005 to Steven and Brandi (Rogers) Tracy. He attended Williamstown Elementary School and then... View Obituary & Service Information

The family of Steven M. Tracy II created this Life Tributes page to make it easy to share your memories.