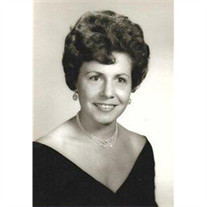 BARRE CITY-Theresa Angela Usle, 92, died peacefully at her home on Sunday, July 5th, 2020 surrounded by her family. Theresa was born in Barre, Vermont on September 9th, 1927 to Emile and Aldea (Hebert) Tousignant. She attended Holy Ghost Convent in Graniteville, Vermont. In August of 1946, she married Cipriano "Cip" Usle. They celebrated 53 years of marriage until his passing in 1999. During World War II, Theresa worked in Springfield, MA for American Bosch, she later returned to Barre to raise a family. Later she helped manage the Salvation Army store and subsequently serving as a volunteer. Friends and family members greatly appreciated her humor, generosity, and home cooked meals. She truly believed that "her house" was "your house", for a game of cards or cribbage, or just lively conversation. She loved to organize a weekend garage sale, complete puzzles, fish, and travel (during her younger years), and to locate and pick wild berries. But a true passion involved creating poetry for and about the people she loved. And although she embraced Facebook later in life, she never relied on such technology to remember and to recognize a family member's birthday or wedding anniversary. To those who knew her, she was certainly deserving of the nickname and accolade, "Bonne Femme" (Good Woman). She will be missed by all. She is survived by her two sons, Michael Usle and his wife, Mele, of Syracuse, UT; Steven Usle and his wife, Diane, of Norwich, VT; and by her son-in-law, David LaFlower, of Barre, VT.  She leaves 11 grandchildren, 15 great grandchildren, and five great-great grandchildren. Theresa was predeceased by 12 siblings, and by her loving daughter, Linda LaFlower. A Mass of Christian burial will be held on Tuesday, July 14, 2020 at St. Monica Church at 10:00 AM with burial at St. Sylvester Cemetery in Lower Websterville, VT. There will be no calling hours. Contributions in her memory may be made to the Central Vermont Home Health and Hospice, Inc. at 600 Granger Road, Barre, Vermont 05641. The family would like to extend its heartfelt thanks to this organization for its support and professional care. Arrangements are in the care of the Pruneau-Polli Funeral Home, 58 Summer Street in Barre.

The family of Theresa A. Usle created this Life Tributes page to make it easy to share your memories.

Send flowers to the Usle family.