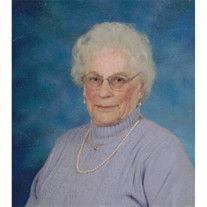 LYDNON CENTER - Virginia Hall Hodges Cantin passed away peacefully on Wednesday, January 5, 2022, at Barre Gardens in Barre, Vermont. Ginny was born August 1, 1931, at home in South Wheelock and delivered by her Aunt Georgia Smith. Her parents were Flora Craig Hall and Walter Hall, both deceased. She had no siblings but considered her cousins Gordon and Sunny Smith, both deceased, her brothers as the three grew up together. Her education started at the one-room schoolhouse on Stannard Mountain, and she graduated with honors from Lyndon Institute in 1949. Ginny started college at Lyndon State College but withdrew to provide full-time care for Flora, her mom, who passed away in 1958. On June 27, 1951, Ginny married Alan G. Hodges from North Danville. Before going to their wedding reception, they needed to milk the cows at their new farm in Sutton. They sold the farm and moved to Lyndon Center in 1966. Alan passed on January 1, 2006. Ginny helped run the family farm and was the bookkeeper for the farm, their agricultural supply business, and Hodges Antiques, where they enjoyed many trips looking for more antiques. In 2011, Ginny married Leonard Cantin and moved to East Haven until her diabetes and the onset of dementia could no longer be treated at home. She moved to Barre Gardens for care on September 1, 2017, and to be closer to Pam, her daughter. Ginny leaves behind her husband Leonard of Barton, her daughter Pamela Woodworth and husband Fred of Rochester, New Hampshire, and grandchildren Sarah and Freddy, her son Michael Hodges and wife Barbara of Totowa, New Jersey, and grandchildren Kelly, Laurie, Joshua, Esther, Lydia, and Grace. She also leaves behind 14 great-grandchildren, a sister-in-law Ann Hodges of North Danville and one nephew, and three nieces. Ginny was proud of her children and grandchildren and trusted them to pass the family traditions on to the next generation. At Ginny's request, there will be no calling hours or funeral with a family gathering to take place at a future date. Please send contributions in her memory to the Activity Department of Barre Gardens, 378 Prospect St. Barre, VT 05641. Pam and Mike are grateful for their moms loving care while at Barre Gardens, where the staff became her 2nd family. Arrangements are in the care of the Pruneau-Polli Funeral Home, 58 Summer Street in Barre.

The family of Virginia H. Cantin created this Life Tributes page to make it easy to share your memories.

Send flowers to the Cantin family.