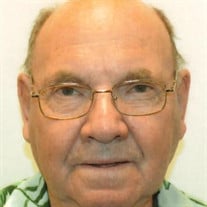 Not sure what to send?

Fort Myers FL. – Yves J. Perras of Fort Myers, FL passed away on March 6, 2022. Yves was born in Coaticook, Quebec Canada on October 22, 1939, and became a United States Citizen on November 5, 1958. He was preceded in death by his parents, Aurele and Marie (nee Boutin) Perras; and his daughter, Carolle (Jerry) Keene. He is survived by his sister, Hugette Savard (Paul); daughter, Slyvie Glowacki (Ken); four sons, John, Joey (Christine), Jacque and Jimmy (Kylene); many grandchildren and two great grandchildren. Yves was very proud of his certificate of completion of apprenticeship with the State of Vermont as a granite cutter. He went on to his own his own monument business in South Windsor, CT. Yves settled in Port Charlotte, FL taking care of his mother until her passing in 2013. He then volunteered his time at the American Veterans Post as an officer and chef. Yves later moved to Fort Myers, FL with his friend Bob Brown. Yves volunteered at various fundraisers and annual events. Yves’s ashes will rest in St. Sylvester’s Catholic cemetery in Websterville, VT. There will be no calling hours. A Mass of Christian burial to celebrate the life of Yves Perras will be held on June 11, 2022, at 11:00 am at St. Monica’s Church in Barre. Burial will follow at St. Sylvester’s cemetery in lower Websterville. In lieu of flowers, donations can be made in Yves’s memory to the St. Monica’s Catholic School, 79 Summer Street, in Barre, Vermont 05641. Thank you to everyone who helped along the way. Be in Peace, Yves. Arrangements are in the care of Pruneau-Polli Funeral Home, 58 Summer Street in Barre.

The family of Yves J. Perras created this Life Tributes page to make it easy to share your memories.